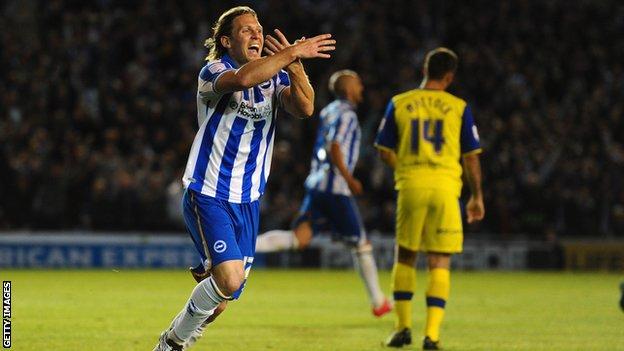 Will Buckley made it three from Bruno's lofted diagonal pass to seal Brighton's third straight win.

It means Dave Jones's Wednesday side have suffered back-to-back defeats after collecting seven points from their first three league games.

Buckley forced an early save from Owls' goalkeeper Chris Kirkland before Bridge's 24th-minute free kick looped in off Rhys McCabe.

The visitors struggled to create clear chances in the opening 45 minutes, and Jones brought on teenager Ross Barkley at half-time to make his debut.

Midfielder Barkley, signed on a month's loan from Everton, could not spark a revival though, and Brighton increased their lead nine minutes into the second half.

Bruno evaded a series of challenges as he cut into the penalty area from the right, and his low cross was stroked in by Mackail-Smith.

The full-back also created Brighton's third goal with a pass that caught out Wednesday's defence and found Buckley, whose first touch set up a cool, chipped finish.