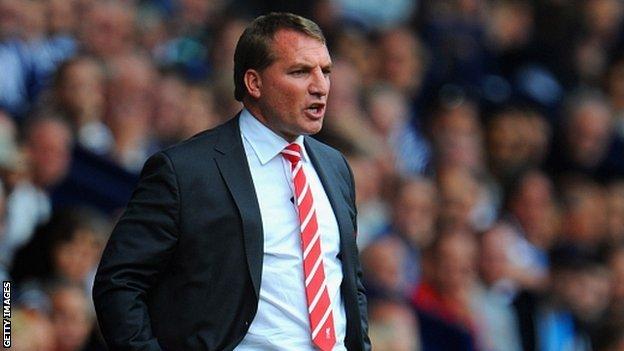 Liverpool boss Brendan Rodgers wants his players to "man up" in the face of injuries as they look to battle through until January with a limited squad.

The Reds have only two senior strikers after failing to replace Andy Carroll, who joined West Ham on loan.

"We are going to be stretched to the limit between now and January," Rodgers told the Anfield Wrap podcast.

"I've spoken to the players and told them if you get little niggles or little injuries you've got to man up."

Rodgers, who succeeded Kenny Dalglish in May, has overseen Liverpool's worst start to a league season in 50 years amid criticism of the club's summer transfer dealings.

After allowing Carroll to join the Hammers on loan on the eve of transfer deadline day, the club failed with a bid for Clint Dempsey, who joined Tottenham, and missed out on a loan deal for Chelsea's Daniel Sturridge.

Rodgers admitted the summer transfer dealings "didn't quite go to plan" but insists he was right to trim a bloated and overpaid squad.

The former Swansea boss plans to put his faith in young players before he has the option to make signings again in the January transfer window.

"Every manager wants more players but there needed to be a little bit of surgery done on the squad," he said. "Some of the wages were absolutely astronomical in terms of value and worth, and that needed to be looked at.

"I think what we are going to see over the next three or four months is 'do we have enough good young players to come in?' That will take us through to January then we can assess it from there."

With just one point from three games, Liverpool have made their worst start to a season since 1962-63 when they had just been promoted to the top flight.

The Reds have won only one of their last seven league games at Anfield - a victory over an under-strength Chelsea at the end of last season.

The last time Liverpool failed to win at least one of their opening three Premier League games was in 2003.

"Maybe boys like Suso will get an opportunity now," he said. "If you look at the Premier League and compare it with other European leagues, the percentage of under-21 players is very, very small.

"I have an inherent belief in young players. They have to have the talent and the personality. A young player will run through a barbed wire fence for you. An older player will look for a hole in the fence.

"He is getting better tactically and he is a threat. I am trying to keep him out of the media and keep him focused and composed and then Liverpool will have a player for the future."

In a 45-minute discussion with fan groups, broadcast by the Anfield Wrap, Rodgers went on to defend his trademark short-passing style but urged Liverpool supporters to be patient.

"I understand that you people need results and want to see improvement but the more we work together, we get the ideas and the types of players that fit this way of working, you will see it change very quickly," he said.

Meanwhile, Liverpool captain Steven Gerrard is confident they will turn things around.

Gerrard, with England in Chisinau for their opening World Cup qualifier against Moldova, said: "When you're not winning it's tough but when you've got my kind of experience you don't panic after three games.

"Against Manchester City we were fantastic and should have won but against Arsenal it was the opposite. We didn't deserve anything from that game."

But Gerrard added: "This is no time to panic. It has been a tough few weeks for us but I don't think it is anything we can't straighten out."