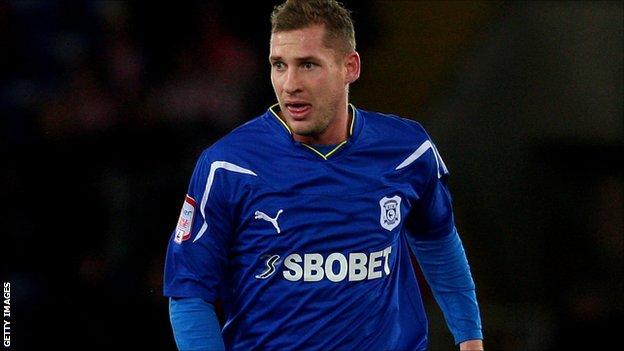 Financially-stricken League One side Portsmouth have signed defender Gabor Gyepes on a one-month deal, subject to international clearance.

The 31-year-old Hungarian trained with Pompey at the end of last season.

Gyepes came to England to join Wolves in 2005 before going on to play for Northampton and Cardiff City.

"He's played for a few clubs in England so knows what to expect and we're pleased to be able to add him to our squad," said manager Michael Appleton.

Appleton later told BBC Radio Solent: "He is a steady eddie and will bring a bit of maturity to our squad.

"We had him here training last season but could not do anything at the time.

"But when there was opportunity to get him in we did, he will give us a bit of stability at centre-half."

Meanwhile, Appleton has confirmed that former defender Hermann Hreidarsson is training with the squad but will not play.

The 38-year-old from Iceland, who has told Appleton he will play for the club for free, left Pompey in January for Coventry but only made two appearances for the Sky Blues and left this summer.

"Hermann has made his mind up to go back to Iceland," Appleton told BBC Radio Solent.

"His family are there already. In the mean time he wants to stay fit and keep himself in decent shape. I think he will continue to play in Iceland.

"It is a no brainer from our point of view as he is a good character to have around the place in this difficult time. It works out for both parties."

Appleton also confirmed that on-loan Paul Connolly has returned to Leeds United because of injury.