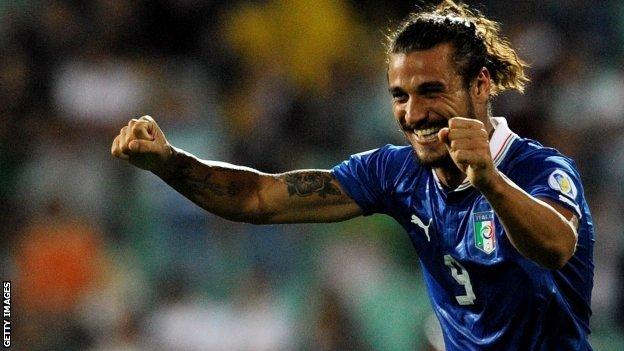 Italy had to settle for a point in their opening World Cup qualifier after an unconvincing display in Bulgaria.

The Euro 2012 runners-up fell behind to Stanislav Manolev's rocket shot before hitting back through Pablo Osvaldo's quick-fire double before half-time.

But Italy's hopes of a winning start in Group B were denied by Georgi Milanov, who converted Iliyan Mitsanski's cross.

Elsewhere, there were wins for Germany, the Netherlands and France, who saw off Finland thanks to Abou Diaby's goal.

Roma striker Osvaldo, 26, who was born in Buenos Aires, was making his third appearance for his adopted country and got off the mark with two goals in the space of five minutes.

Osvaldo netted from close range in the 36th minute from Claudio Marchisio's clever assist and gave the Azzurri the lead when his header deflected home soon afterwards.

But Italy's advantage never looked safe and Bulgaria earned a deserved point when Milanov fired home from 10 yards out after 66 minutes.

In Group C, Germany found it tough to break down the Faroe Islands in Hannover but clinched their 500th international victory despite the best efforts of visiting keeper Gunnar Nielsen.

The former Manchester City man made several outstanding stops but was beaten by Mario Goetze's solo strike in the 28th minute, before Mesut Ozil added two more goals after the break.

"We missed too many chances, that seems to be our problem at the moment," coach Joachim Loew said afterwards.

The Netherlands also had to be patient before securing their win over Turkey in Group D.

Manchester United striker Robin van Persie put the Dutch ahead from a Wesley Sneijder corner after 17 minutes but they were lucky to escape before the break when Newcastle keeper Tim Krul hesitated, allowing Umut Bulut to head against the bar.

Turkey were less of a threat after the break but Louis van Gaal's side did not add a second goal until Luciano Narsingh broke away to score in stoppage time.

And France also ended up labouring to victory over a battling Finland side in Helsinki, holding on after Karim Benzema set up Diaby to score.

"We were in danger in the end but it's always the case when you fail to add a second goal," Didier Deschamps said after winning his first competitive game in charge.

Top scorers on the night were Bosnia-Herzegovina, who demolished Liechtenstein 8-1 in Group G, with Manchester City striker Edin Dzeko scoring a hat-trick.