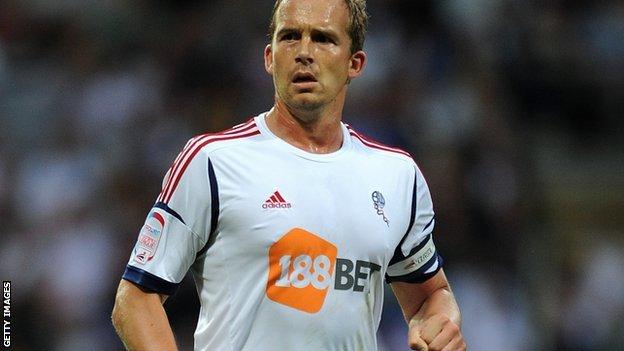 Bolton bounced back from three games without victory as they narrowly beat Watford at the Reebok Stadium.

Matt Mills scored his first goal for the home side, powerfully heading in Chris Eagles's corner.

The former Manchester United winger was the provider once again, setting up Kevin Davies to score from close in.

Lloyd Doyley's cross evaded everyone, including goalkeeper Adam Bogdan, to ensure a tense finish but the home side held on for victory.

Bolton were expected to be among the pack chasing promotion back to the Premier League after relegation last season, but Owen Coyle's side have made a stuttering start to life in the second tier and this was only their second win from five games.

However, the former Arsenal stopper could not keep out Mills's thumping header, despite getting a hand to the ball.

Almunia was involved once again, stifling an effort from David Ngog, but was powerless to stopping Bolton's second as the superb Eagles, who caused the Watford back line problems all afternoon, gave striker Davies an easy finish.

The travelling fans were given hope when Doyley's cross somehow ended up in the back of the net and Nyron Nosworthy could have equalised but headed off target.

A late header from Bolton captain Davies could have restored the two-goal advantage, but the hosts still secured all three points.