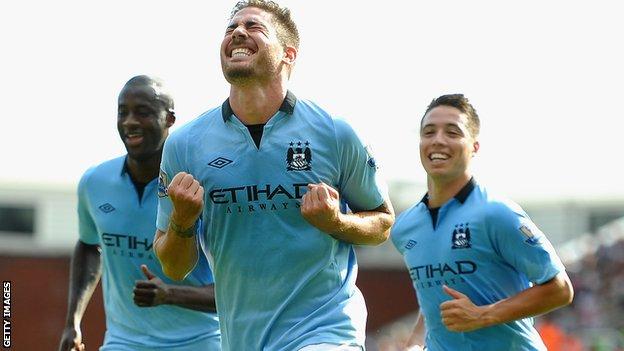 Javi Garcia scored on his Manchester City debut to earn a point for his side against Stoke at the Britannia.

Peter Crouch had fired the hosts ahead in controversial circumstances from close range, the England striker handling the ball before scoring.

But Garcia levelled with a free header from Carlos Tevez's free-kick.

Stoke sent on Michael Owen for his debut late on but City went closest to winning it when Edin Dzeko's lob was cleared off the line by Ryan Shawcross.

Dzeko looked set to earn City a dramatic win with his late effort but centre-back Shawcross raced back to hack the ball clear to the relief of the home fans.

Roberto Mancini is still without a win at the Britannia Stadium in six attempts as City boss and his side's performance was watched by Real Madrid assistant manager Jose Morais ahead of their Champions League game in the Spanish capital on Tuesday.

The Premier League champions, who were missing injured forward Sergio Aguero and gave debuts to Scott Sinclair and Maicon, lacked sparkle in attack and there was also plenty of finger-pointing after Stoke went ahead, despite the controversy surrounding their goal.

The last time Crouch scored against Manchester City the exiled England striker found the net in spectacular style from 30 yards, but this effort was very different.

"What a thrilling finale as Ryan Shawcross's goal line clearance denies substitute Edin Dzeko with virtually the last kick of the game. City finished strongly but Stoke battled hard for a point."

After the ball broke to Crouch in the box he bundled past three challenges but clearly used his left hand to control it before slamming a 15th-minute shot beyond City keeper Joe Hart.

The visitors will feel agrieved referee Mark Clattenburg allowed the goal to stand but Mancini's side - still seeking their first clean sheet of the season - have only themselves to blame after failing to clear a Charlie Adam corner.

Carlos Tevez, Mario Balotelli, back from an eye injury, and Yaya Toure all spurned chances before Spanish international Garcia, once of Real Madrid, showed terrific composure with a header as he connected with Tevez's free-kick.

Stoke keeper Asmir Begovic produced a terrific save with his leg to keep out Yaya Toure after the home defence had been sliced wide open in the second half, and although the visitors are now unbeaten in 10 league games, the Britannia Stadium remains one of their least happy hunting grounds.

In contrast the Potters are now without a Premier League win in 10 attempts and face a daunting game at Chelsea next weekend.