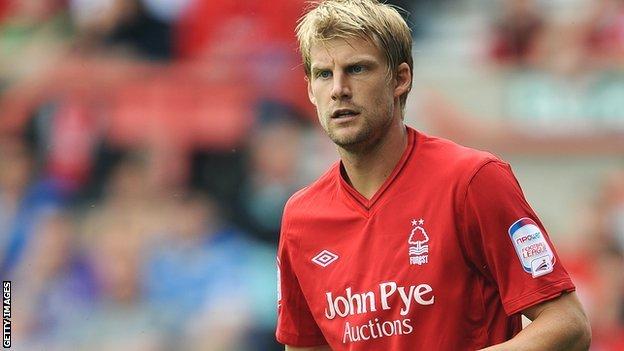 Substitutes Simon Cox and Dan Harding were on target as Nottingham Forest came from 2-0 down to deny Birmingham City victory and maintain their unbeaten start to the league season.

Forest edged a scoreless first half but trailed to two goals in three minutes.

Hayden Mullins opened the scoring with a 15-yard volley and Marlon King's shot from the edge of the area made it 2-0.

But Cox's exquisite finish gave Forest a glimmer of hope and Dan Harding rescued a point with a late strike.

Forest, who drop to sixth in the Championship table, will feel they deserved at least a point having wasted a number of decent openings in an entertaining game at the City Ground.

Dexter Blackstock headed an early chance over the bar for the hosts, and Blues keeper Jack Butland then had to recover from his own mistake to produce a smart stop to keep out a Billy Sharp strike and deny the striker his first Forest goal.

Butland was also forced into action to keep out a dangerous Lewis McGugan cross after a fine counter-attack led to an almighty goalmouth scramble in which Sharp, McGugan and Adlene Guedioura all went close.

The visitors finally sparked into life and nearly went ahead against the run of play when debutant Leroy Lita teed up King only for keeper Lee Camp to race from his line and pull off a fine block.

But Birmingham were much improved after the interval and, with substitute Nathan Redmond in fine form, looked all set for victory following a devastating three-minute spell.

A fine Mullins strike put them in control on 69 minutes and Redmond evaded two challenges before finding King, who finished brilliantly from the edge of the area to double the lead.

But Cox - who seemed likely to miss the match with a foot injury - controlled Sam Hutchinson's long ball brilliantly and instantly flicked the ball over Butland to make it 2-1.

And home pressure was finally rewarded four minutes from time following some great work from Greg Halford when Harding's shot took a deflection off Pablo Ibanez and went in at the far post.

The result means Forest remain unbeaten in the league, while Birmingham who are just one place above the relegation zone, can at least celebrate a first away point this season.