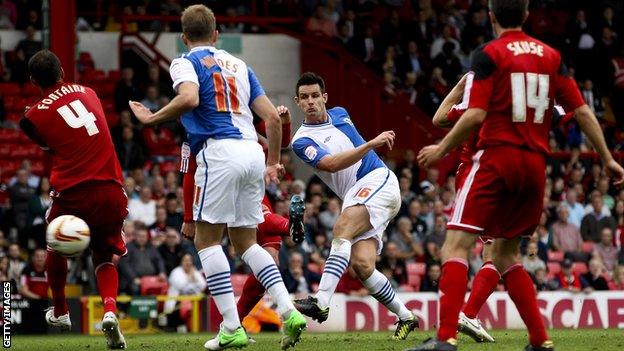 Albert Adomah toe-poked City ahead but Rhodes converted a through ball and Nuno Gomes' low shot put Rovers 2-1 up.

Stephen Pearson swept in to level for City but Ruben Rochina found the top corner to make it 3-2 to the visitors.

City's Sam Baldock scored from 18 yards to make it 3-3 but in stoppage time Scott Dann lashed in and Rhodes scored on a counter-attack to snatch victory.

Rovers in the Championship

But Rhodes began to repay the £8m Rovers paid Huddersfield for his services in the 28th minute, taking advantage of a slip from Robins centre-back Liam Fontaine before turning provider to allow Gomes to make it 2-1 to the visitors 10 minutes after half time with a composed low finish.

Fellow substitute Baldock looked set to have earned a point for City when he made it 3-3 from the edge of the area two minutes later.

But Dann smashed in after Morten Gamst Pedersen's corner fell to him on the penalty spot and Rhodes capped a fine performance with his second and Rovers's fifth on the counter attack.

Steve Kean's unbeaten side are one point clear at the top ahead of home matches against Barnsley and Middlesbrough next Tuesday and Friday respectively.

"The great thing when you buy a quality striker is that when he gets a chance you expect him to score.

"But there is much more to Jordan's game than finding the back of the net and he is open to plenty of improvement at such a young age.

"It's great to be top of the Championship, even this early in the season, but it goes without saying that we need to improve defensively."