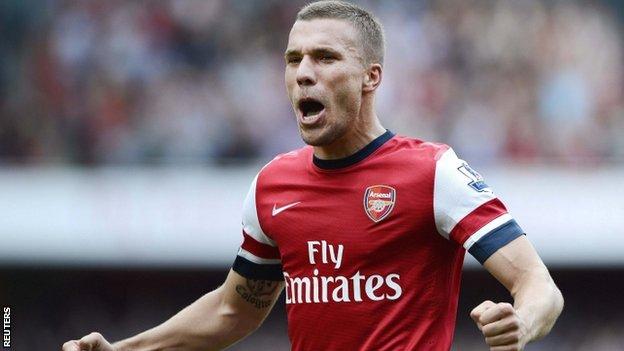 A Jos Hooiveld own goal opened the scoring before Lukas Podolski arrowed a 25-yard free-kick into the top corner.

Gervinho then drilled in, and Nathaniel Clyne buried a second own goal before Danny Fox pulled one back.

Gervinho grabbed his second after the break and substitute Theo Walcott then added a late sixth to leave Southampton still looking for their first point.

"This game was all over at half-time. Southampton put up more of a fight after the break but it is all relative - they have been thrashed today."

With games against both Manchester clubs and a trip to Emirates Stadium in their first four games, life back in the top flight was always going to get off to a tough start for Nigel Adkins' side.

The Saints scared Manchester United before the international break, but were simply blown away in an opening 40 minutes here as Arsenal ran riot.

Many of the headlines emanating from the Emirates this summer concentrated on the loss of skipper Robin van Persie and Alex Song, but in Lukas Podolski and Santi Cazorla, manager Arsene Wenger has signed two players of genuine quality.

Those two in particular were behind a glittering first-half display, with Southampton simply unable to cope at times with the movement and passing in the final third.

Podolski began the game operating from the left but was continually on the move, swapping positions with Cazorla and Gervinho in a fluid front three.

Left-back Kieran Gibbs was also a major attacking threat as the visitors' defence was stretched to breaking point.

Podolski and Cazorla had already gone close before Podolski retrieved a lost cause in midfield and played in the impressive Gibbs overlapping on the left.

The defender's low cross-shot squirmed through the legs of Kelvin Davis and rebounded into the net off the shins of Hooiveld.

Podolski's goalscoring record in the Bundesliga was not always overly impressive, but his haul of 44 international goals suggested he would be a potent threat in the Premier League and he doubled the lead with a brilliant free-kick from 25 yards, giving Davis no chance.

Hooiveld went off with a calf injury before the half-hour mark as Adkins attempted to plug the holes in his defence, only for replacement Maya Yoshida to be culpable for the third goal.

Mikel Arteta lifted a pass over the Japanese defender, who was caught horribly out of position as Gervinho sprinted clear to thump a shot past Davis at his near post.

Deja vu for the Saints

Southampton suffered their biggest Premier League defeat in nine years, since they also lost by the same score to the same team - 6-1 at Arsenal in May 2003.

Cazorla, Podolski and Gibbs then carved open the Saints with another neat passing triangle down the left and when Gibbs flashed a cross towards goal, Clyne could only turn the ball past Davis and into the net.

Fox looked as surprised as everyone else when he pulled one back for the visitors on the stroke of half-time - the first goal conceded by Arsenal in the league this season. Wojciech Szczesny was at fault as he collided with Carl Jenkinson to leave Fox with a tap-in.

The home side were not at the same level after the break as Southampton's record signing Gaston Ramirez began to show a few glimpses of his ability.

But it was an Arsenal replacement who gave the game some impetus again, Aaron Ramsey showing great skill to flick the ball past Clyne and see a low shot hit the post, Gervinho tucking away the rebound with ease.

And the rout was concluded late on when Thomas Vermaelen saw his powerful shot pushed away by Davis, but Saints old boy Walcott steered home the rebound left-footed.

"Arsenal were very good. At times they were exhilarating as they have been many times here, it was a lesson for our players.

"If you give quality players time they will hurt you and that's what happened. We turned it over far too cheaply.

"We knew these first four games would be tough, we haven't got any points but we will get ready for next week and now we have to start getting points on the board. This is a ruthless division."