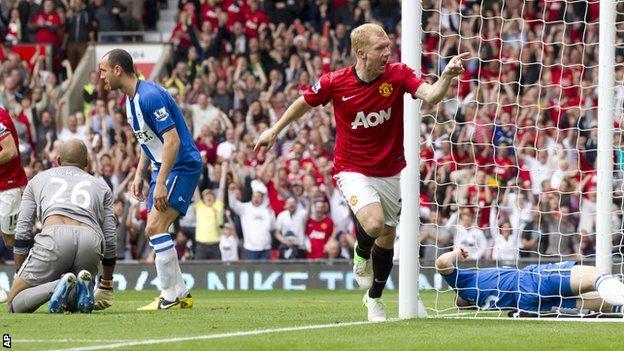 Paul Scholes celebrated another landmark in his glittering career by scoring the opening goal as Manchester United coasted to a resounding victory over Wigan at Old Trafford.

The 37-year-old, making his 700th appearance for United, tapped in from close range six minutes into the second half to inspire a victory that lifts his side in to second place in the Premier League table, a point behind leaders Chelsea.

Hernandez turned in debutant Alex Buttner's low cross to make it two, before the Dutchman himself beat Al-Habsi too easily from a narrow angle. Substitute Nick Powell, also making his debut, completed the rout with a thunderous 20-yard shot.

The one negative note for the home side was some unsavoury chanting from a minority of their fans aimed at Liverpool supporters in the wake of revelations about the Hillsborough tragedy.

After the match a Manchester United spokesman said: "The manager has made the club's position very clear on this matter, it's now up to the fans to respect that."

For long periods United were well below their best, especially during a first half which Wigan finished the more convincingly.

"The legs may be a little heavier and the goals may not come nearly as readily but Ferguson's faith in Scholes has never wavered."

But as the visitors' exhaustive pressing game began to run out of steam, Sir Alex Ferguson's side moved through the gears and then had the luxury of giving Robin van Persie a 20 minute run-out ahead of Wednesday's Champions League match against Galatasaray.

Scholes was at the heart of United's revival, pulling the strings with his laser-guided passing and well-oiled repertoire of feints and flicks.

There was more than one reminder that his tackling remains more than a little wild, but as he trudged off to a standing ovation 20 minutes from time, it was his goal that United fans preferred to remember.

The result aside, this was a landmark day for United. Scholes was making his 700th appearance in a United shirt and Rio Ferdinand his 400th, while Ryan Giggs took to the field for his 600th Premier League match.

None of it made pretty reading for Wigan, who had lost all seven of their Premier League matches at Old Trafford, conceding 24 goals and with just a lone stoppage-time penalty in 2006 to show for their efforts. And yet somehow there was hope.

Ferguson admitted in his pre-match programme notes that defeat by "little Wigan" had ultimately cost United the title last season.

And until Scholes broke the deadlock five minutes into the second half, "little Wigan" were threatening to do it all over again, as they tackled, battled, and denied their more celebrated opponents space.

United might have been ahead as early as the fifth minute, when Al-Habsi was controversially adjudged to have made contact with Danny Welbeck in the penalty area, but the Wigan goalkeeper went to down to his left to deny Hernandez from the resulting penalty.

It was Welbeck who had the best of United's chances during a fragmented and frustrating first half, with the England striker creating and spurning a series of opportunities.

Wigan ended the first period on the front foot, with Ivan Ramis and, in particular, Arouna Kone spurning good chances.

And yet all that was forgotten within five minutes of the restart, when Michael Carrick spun on the edge of the penalty area and freed Nani down the right.

The Portuguese forward's low cross was spilled by Al-Habsi and Scholes was on hand to turn the ball into the net from six yards.

A second followed eight minutes later, Buttner reacting first as Giggs's attempted cross was blocked and steering the ball across goal, where Hernandez beat the offside trap to score.

Buttner added a third, rampaging down the left and beating Al-Habsi from an apparently impossible angle, before Powell, minutes after coming on as a substitute, added a fourth.