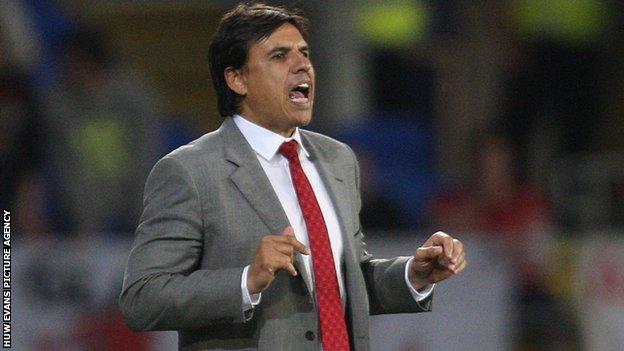 An excited and hopeful crowd of 20,000 entered the Cardiff City Stadium yearning for Wales to make a strong start to their World Cup 2014 qualifying campaign against Belgium.

For the first time since the Euro 2004 qualifying campaign the nation really believes that Wales have a fantastic chance of qualifying for Brazil 2014, and rightly so with the flourishing talent that has emerged over the past 18 months.

Unfortunately last night's opener against a much-fancied Belgian 'golden generation' ended in defeat, but there were still positives to be taken from the 90 minutes.

Chris Coleman's job wasn't made any easier in the hours leading up to kick off with the invaluable Joe Allen having to miss out due to illness.

The defensive work of Aaron Ramsey, Gareth Bale and Simon Church was excellent at times, but this in turn minimized the threat of the Welsh attack

This evidently affected Coleman's plans, with Ashley Williams being moved from central defence - where he has been rock solid - to a more unfamiliar holding midfield job.

Belgium were always going to provide tough opposition regardless of any Welsh injury issues.

The Belgian line-up is filled with quality in all departments, with stars of the Premier League in the shape of Vincent Kompany, Eden Hazard, Mousa Dembele and Marouane Fellaini just a few of the names that formed the starting XI.

The depth of quality is also there for all to see, with highly rated youngsters Romelu Lukaku and Kevin De Bruyne having to settle for places on the bench.

Both teams lined-up in a 4-3-3 formation, the Welsh shape taking a slightly more defensive look with Williams replacing Allen in midfield.

For the first 20 minutes the game was finely balanced, Belgium dominating possession without getting behind the Welsh backline on too many occasions.

In fact, Wales dealt comfortably with the threat of the Belgian attack up until the sending off of James Collins after a heavy lunge on the impressive Guillaume Gillet on the 26-minute mark.

Thereafter, Belgium's dominance was all the more apparent with the ever dangerous Hazard and Dries Mertens finding more time and space to operate against the 10 men of Wales.

The inevitable Belgian breakthrough came in the 42nd minute courtesy of a strong Kompany header from Mertens' excellent corner.

The second half continued in much the same vein as the end of the first half; Belgium dominating possession with Wales absorbing the pressure and hoping to build quick counter attacks.

The defensive work of Aaron Ramsey, Gareth Bale and Simon Church was excellent at times, but this in turn minimised the threat of the Welsh attack, leaving big Steve Morison isolated and starved of any real service.

The boys still admirably worked away and kept their shape well under the circumstances, Ashley Williams and Darcy Blake once again producing outstanding performances at the heart of the defence.

Tottenham's Jan Vertonghen secured the victory with 10 minutes remaining from another set piece, this time smashing a 20-yard free kick into the bottom left corner.

Of course a 2-0 defeat in your opening qualifying games is less than ideal, but there is certainly better to come from Chris Coleman's men.

When you take into account the extended injury list, James Collins's red card, and the quality of the opposition in hand, it was always going to be difficult to take points from the game.

However, two defeats on the spin in what promises to be a tightly contested group would deliver a blow to Welsh chances of qualifying for Brazil.

A trip to Serbia on Tuesday is next for the Welsh lads, and after last night's defeat the need for our first points is ever more significant.