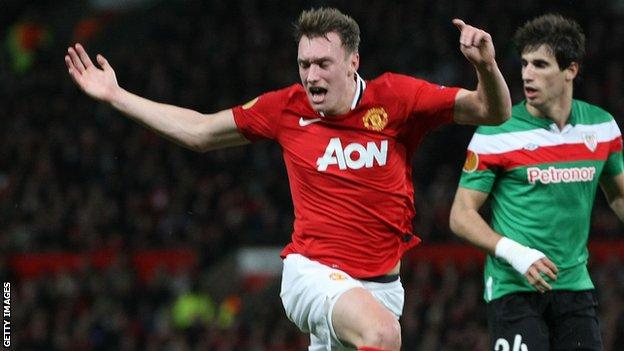 Manchester United defender Phil Jones is facing up to eight weeks on the sidelines after having surgery on a knee injury, the club has announced.

Jones, 20, has yet to make an appearance this season after hurting his back during pre-season and suffered this latest injury in training.

"Phil Jones has had surgery on a knee meniscus tear sustained in training," said a United spokesman.

"It will require six to eight weeks of rehabilitation."

Jones, whose last competitive appearance for United was against Sunderland on the final day of last season, is understood to have suffered his latest injury in training earlier this week.

The England international was sent for a scan on his right knee which has confirmed he requires an extensive period of rehabilitation.

Jones was believed to be close to returning following back spasms when he damaged his knee.

The injury is likely to rule Jones out of three Champions League group games against Galatasaray [home] on 19 September, CFR Cluj-Napoca [away] on 2 October and the 23 October game away to Sporting Braga.

In addition, he will up to six Premier League games including United's trip to Liverpool on 23 September and the away match at Chelsea on 28 October.

Manager Sir Alex Ferguson will hope the former Blackburn player will be available for Arsenal's visit to Old Trafford on 3 November.