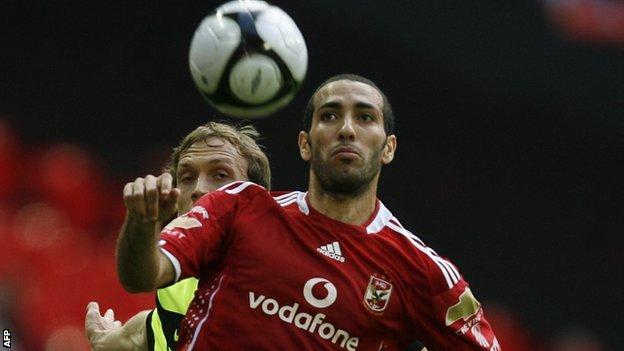 Al Ahly have suspended midfielder Mohamed Aboutrika for two months for his refusal to play in the Egyptian Super Cup match against Enppi on Sunday.

Aboutrika, who is one of Egypt's best-known players and has been capped 81 times by his country, was not at the match in Alexandria, which Ahly won 2-1.

The 33-year-old has stated that he profoundly accepts the penalty imposed by the club and is sorry for putting the club management and his team-mates under pressure before and during the match.

His decision not to play a part in the game was in support of Ahly fans' demands for the sport in Egypt to undergo a major overhaul following riots during Ahly's league match against Al Masry in Port Said in February, which left more than 70 fans dead.

Aboutrika, the BBC African Footballer of the Year in 2008, was left devastated by the tragedy. He initially retired from football, only to change his mind, and recently represented Egypt at the Olympic Games in London.

He scored the winning goal for the Pharoahs as Egypt beat Cameroon 1-0 to retain the Africa Cup of Nations title in Ghana four years ago. The 33-year-old was also a member of the Egyptian squad which won the Cup of Nations on home soil in 2006.

The BBC's reporter in Cairo, Inas Mazha, has said that Ahly club officials tried in vain to persuade Aboutrika to travel.

His actions have been widely criticised but he is no stranger to making a stand. At the 2008 Cup of Nations, he raised his jersey after scoring a goal, to reveal a t-shirt which read 'Sympathise with Gaza'.