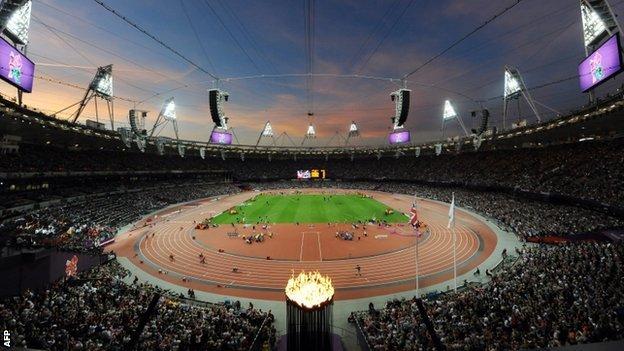 The Hammers are one of four bidders under consideration to lease the £486m stadium after the Paralympics.

"In the long term [moving] is far more beneficial," Hurst, 70, told BBC Sportsweek. "The future of the club, I think, should be in the Olympic Park."

"I feel strongly that is where we have got to go," added the World Cup winner.

West Ham won the backing of Olympic executives ahead of Premier League rivals Tottenham to lease the stadium, before the deal was scrapped last year amid legal wrangling.

The Hammers, who have played at current home Upton Park since 1904, submitted another proposal in March after the bidding process was restarted.

League One side Leyton Orient and the UCFB College of Football Business have also tabled bids, while a plan to turn part of the stadium into a Formula 1 track is another under consideration by the London Legacy Development Corporation.

Hurst, the only man to score a World Cup final hat-trick after his heroics for England against West Germany in 1966, says he is "1,000%" in favour of West Ham moving to Stratford.

"Nobody has a greater feeling about West Ham United at Upton Park than I have," said Hurst, who scored 248 goals in 499 matches spanning 13 years for the Hammers.

"We don't want to be yo-yoing up and down as we have been doing."