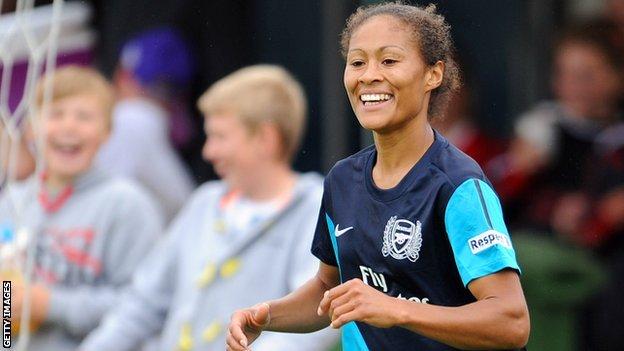 Jennifer Beattie and Rachel Yankey were on target as Arsenal beat Lincoln 2-1 to maintain a five-point lead at the top of the Women's Super League.

Second-placed Everton won 2-1 against Chelsea, with their goals coming from Toni Duggan and Gwennan Harries.

Birmingham City remain a point behind Everton after a Rachel Williams hat-trick helped them beat Liverpool 5-2.

Doncaster Belles stretched their unbeaten run to three games with a 1-1 draw against Bristol Academy.

Arsenal started slowly but gradually gained control and went ahead through Beattie in the 25th minute.

Left winger Yankey's cross was pushed away by goalkeeper Nicola Hobbs, but Beattie followed up to drive home the loose ball.

Yankey doubled the score 12 minutes later and again the goal came from a rebound, the winger capitalising after a Jordan Nobbs shot had been blocked on the line.

Beattie and Yankey both went close to adding to their respective tallies early in the second half.

But Lincoln fought back to score a deserved goal through midfielder Remi Allen's 79th-minute penalty following a Katie Chapman foul on Clarke.

Further pressure almost resulted in an equaliser when midfielder Laura Alleway's 88th-minute effort was tipped over the bar by keeper Emma Byrne.

But the Gunners held on to keep alive the WSL's only unbeaten record.

Everton had the better of the game from the kick-off but wasted a great chance to take the lead when midfielder Fara Williams' 41st-minute penalty was saved by keeper Carly Telford.

A minute after the break the Toffees went ahead, however, winger Duggan hitting the net with a tremendous 25-yard strike.

And after pressing for another goal for much of the second half, the clincher arrived when Harries drove in a superb 20-yard shot six minutes from time.

Chelsea pulled a goal back through Spanish striker Adriana's close-range finish in the third minute of stoppage time, but it was too little too late for the visitors.

Chloe Jones volleyed Liverpool into a fourth-minute lead, but it became the Williams show as Blues took control.

The England striker latched on to a through ball to equalise in the 34th minute and 60 seconds later headed in a Kerys Harrop cross.

Williams' striker partner Jodie Taylor stretched the lead with a low 18 yard drive 23 minutes into the second half.

Winger Eni Aluko's 69th-minute goal from close range ended the game as a contest before Williams completed her hat-trick with a 78th-minute header.

The second-from-bottom Belles continued their recent resurgence with a solid display from the kick-off and twice might have taken a first-half lead.

The home side finally took the lead in the 69th minute, Sigsworth chasing a Millie Bright through ball to shoot home.

But Academy were level within four minutes as Del Rio forced the ball over the line after Nicola Watts had touched on a Jemma Rose cross.

And in a frantic finale the Spanish striker almost snatched a winner when her 83rd-minute shot came back off the inside of the post.