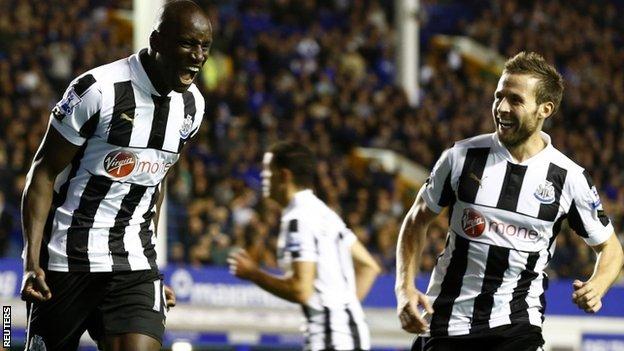 Ba levelled after substitute Victor Anichebe looked to have given Everton victory two minutes from time - after earlier having a header ruled out despite the ball appearing to cross the line.

In a thrilling encounter, Everton dominated the first half and led deservedly through Leighton Baines's early strike until Ba's introduction after the interval transformed Newcastle's attacking threat.

He was on target within four minutes but Goodison Park was infuriated when Anichebe's header dropped behind the line after being parried by Newcastle keeper Steve Harper 12 minutes from time, only for referee Mike Jones to wave play on after looking to his assistant.

"Everton bossed the first half. I was really impressed. Kevin Mirallas was absolutely fantastic. Alan Pardew made changes for the second half and Everton took their foot off the gas. They allowed Newcastle back into it. From then on it was helter skelter. Everton had a goal ruled out which for me crossed the line but sloppy defending let Newcastle equalise late on."

Everton also felt aggrieved when an earlier goal from Marouane Fellaini was disallowed for offside. Anichebe, however, looked to have given Everton the win they felt they deserved but Newcastle's improved second half performance brought them a draw as Ba rolled in his second in the closing moments.

It will once again ignite the debate about goal-line technology - but it will be of no consolation to Everton or manager David Moyes as they were left frustrated.

The evening started in moving fashion as Everton paid an emotional tribute to the Hillsborough families before kick-off, after last week's revelations, as warm applause rang around Goodison Park while The Hollies' hit "He Ain't Heavy He's My Brother" was played. At the same time the names of those who died in the 1989 tragedy were displayed on the big screens.

When the action got under way Everton thought they had taken the lead in the opening moments when Nikica Jelavic turned in after Fellaini's shot had been parried by Harper.

The effort was ruled out for offside and Jelavic's pain was increased as he injured his knee colliding with a post. It was the start of a bruising evening for the Croatian striker which ended with him limping off just before half-time.

Everton's impressive start to the season was mirrored in their fluency early in the game, illustrated by a superb opening goal from Baines. The England defender took Steven Pienaar's clever flick in his stride before drilling a low shot under Harper.

As Everton dominated, the lively Kevin Mirallas illuminated his home debut with a shot narrowly off target while Phil Jagielka glanced the post from 25 yards after Jelavic's delicate lay-off.

Newcastle, even though they spent most of the half in retreat, also had opportunities of their own. Papiss Cisse should have done better than volley wide from Phil Neville's poor header and Baines was forced to scramble off the line from team-mate Leon Osman.

Pardew - watching from the stands as he served the first of a two-game ban for shoving assistant referee Peter Kirkup on the opening day of the season - introduced Ba at the start of the second half and within four minutes he had equalised. Osman lost possession cheaply, allowing Yohan Cabaye to find Ba for a low left-foot finish past Everton keeper Tim Howard.

Everton thought they had regained the lead when Fellaini converted from Pienaar's pass but once again the offside flag chalked off the goal, with replays suggesting it was the most marginal of decisions.

Pienaar was the creator of Everton's best moments and he fashioned an opening for Osman with 15 minutes left but his sidefoot finish was wide.

The night's most contentious moment came with 12 minutes left when Anichebe's header crossed the line before Mike Williamson scrambled it away and play was waved on - much to Goodison Park's disgust.

Hatem Ben Arfa then had the opportunity to increase Everton's sense of injustice but Howard made a crucial block as he accelerated away from Jagielka.

Everton thought they had put the perceived wrong right as Anichebe turned on Pienaar's pass to shoot low past Harper, but Ba had the last word at the end of a hugely entertaining game.

"I was proud of the second half because we were terrific, but in the first half we lacked belief and I was shocked at how we played.

"At half-time I put some belief in the team, sometimes that's all you need.

"In the first half we were as bad as we've ever been since I've been in charge.

"I'll never set up a team to get a point and in the first half we looked as if we did, thankfully that changed in the second half and we got the point."