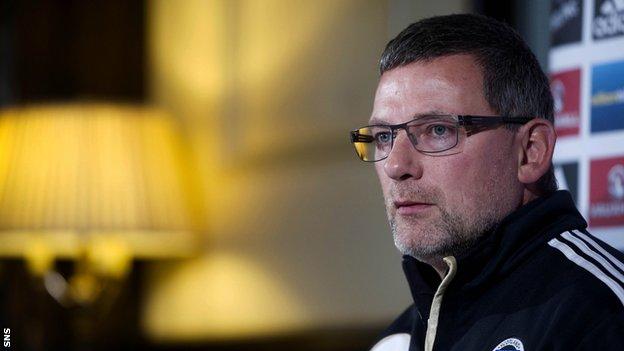 The Scots are aiming to beat Macedonia at Hampden on Tuesday following the goalless draw against Serbia.

"I can understand the frustration and no one is more frustrated than me," Levein said.

"If we win tomorrow night, and results go our way, we could be top of the group."

Levein said it was "nonsense" to be talking about qualification or non-qualification with 27 points still to play for.

Responding to the clamour for Blackburn Rovers striker Jordan Rhodes to start, Levein said he had yet to pick his starting line-up.

And the Scotland manager was keen to accentuate the positive following the goalless draw against the Serbs.

"There's a perfectly reasonable situation, which could happen tomorrow night, is that if we win and results go our way then we go top of the group," he said.

"Then, all of a sudden, the point becomes important. And who knows? Come the end of the tournament, the point against Serbia might be the one that makes all the difference.

"So, we're very positive about what we're doing just now."

Levein stressed that Group A was a particularly competitive qualifying group.

"Maybe some people don't understand the quality of teams we are playing against," he said.

"We did a lot of work on Serbia, we looked at their strengths and weaknesses and we knew we were in for a tough game on Saturday.

"Tonight, we will look at Macedonia and analyse how they play.

"We have to give them respect. If you look at their recent results, they have performed exceptionally well and should have got a point against Croatia the other night."

A second-half header from Everton striker Nikica Jelavic came between the Macedonians and a point against their former Yugoslav countrymen.

Macedonia lost on their last visit to Hampden in 2010 but had beaten the Scots on their own turf earlier in the qualifier for the last World Cup.

"We have had our own troubles with Macedonia in the past, so this will be a tough match for us, a different type of game, but I am looking forward to it," said Levein.

"We have players who didn't hit peak form at the weekend and they are determined to put that right on Tuesday night."

Saturday's final whistle was greeted by boos from some sections of the Tartan Army and by some negativity in the media.

"I have been a little bit annoyed at the hysterical reaction," said Levein.

"I was reasonably pleased with Saturday.

"What is important to me is that there is an overwhelming feeling of positivity about our national team."