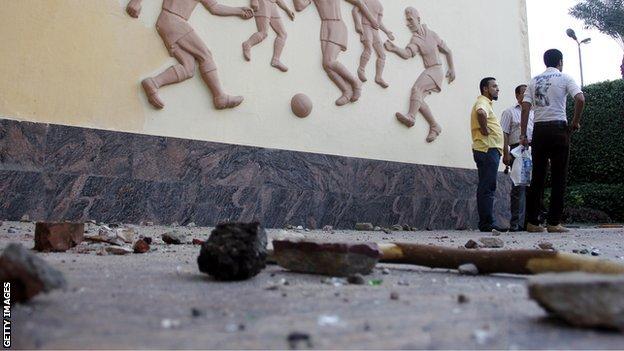 The Egyptian Super Cup went ahead in Alexandria on Sunday despite the kick-off being delayed by demonstrating fans.

Some fans surrounded the team hotel and caused the match to be put back by an hour, but the game then went ahead without any further trouble.

There has been no domestic football in Egypt since February when at least 70 fans died in Port Said during violent clashes at a match between Al Ahly and Al Masry.

Some fans of Ahly had threatened to disrupt the game saying they wanted "justice to be served before football begins again."

The threat from the main group of Ahly's most hardcore fans the "Ultras Ahlawy" was withdrawn on Sunday morning before the game.

However other factions of supporters were reportedly still determined to disrupt the match and get it abandoned.

The match has also caused a rift within the Ahly team with some of the squad reportedly unhappy with Mohamed Aboutrika over his decision not to play in support of the 'Ultras.'

Last week fans attacked not only Al Ahly's training facility but also the headquarters of the Egypt Football Association (pictured) after it was announced the league would being on 17 September.

The league has now been postponed by a month until 17 October and will initially be played behind closed doors.

Sunday's game was the first domestic in Egypt since the tragedy in Port Said although there have been African continental club games played without fans, including a derby between Al Ahly and Zamalek.