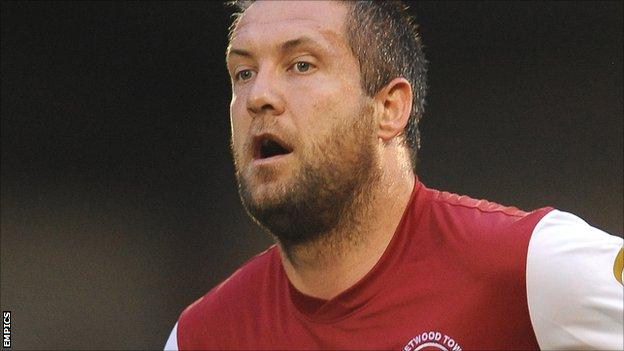 Manager Micky Mellon has emphasised the importance of Jon Parkin to Fleetwood after his match-winning display in the 4-0 win at Morecambe on Saturday.

The striker netted a hat-trick, his first three goals for the club, and set up the other for Barry Nicholson.

Mellon told BBC Radio Lancashire: "Jon is such a big player for us.

It was obviously nice to get off the mark, but the most important thing was that we got three points

"He takes all the bumps and bruises up there in order for the rest of us to catch up and play in good areas. That's why we

The Scot continued: "[When Fleetwood were promoted to League Two] we knew we'd have to have a physical presence in that final third and Jon's certainly given us that.

"He scored a deserved hat-trick and we're delighted for him."

The Cod Army are fourth in the table with 10 points from five matches.

Parkin said: "It was obviously nice to get off the mark, but the most important thing was that we got three points.

"Apart from maybe against Bradford, we've played well in most games. We should have beaten Torquay in our first game so we probably should be two points better off.

"There's good players here and the manager [Micky Mellon] has got a good squad together. If we can carry on playing like that, we should be alright."