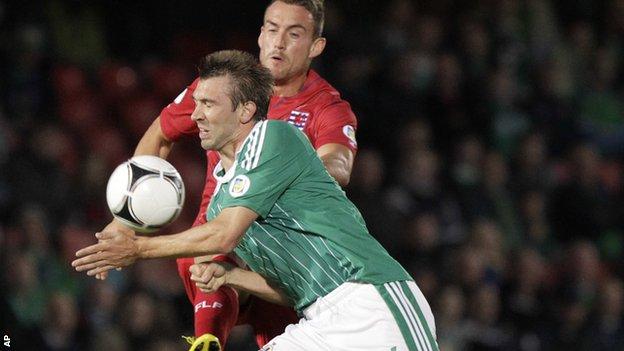 The hosts dominated from the start and a classy dinked finish from Dean Shiels put them ahead.

And Luxembourg grabbed a point when Daniel da Mota's shot deflected off McGivern and flew past Roy Carroll.

It is the first time in 10 competitive games that Luxembourg have avoided defeat, an outcome that looked unlikely when the home side made a bright start.

With Michael O'Neill's side looking to bounce back from a Friday's 2-0 defeat by Russia in their Group F opener, Gareth McAuley headed straight at Joubert in the opening minute and the hosts capitalised on their early pressure with a quality goal after 14 minutes.

Jonny Evans and Shiels had already exchanged passes before the striker ran on to the Manchester United defender's throughball and floated a delicate chip over the advancing Joubert.

With the visitors restricted to long-range efforts, Northern Ireland continued to threaten and Lafferty hit the net twice. However, his first effort was ruled out for a push before an offside decision denied him again.

After home defender McAuley received a booking for a foul on Da Mota that rules him out of month's qualifier against Portugal, Lafferty saw a low strike saved by Joubert and also lobbed wide from 16 yards, while Chris Baird sent a glancing header just wide.

Northern Ireland continued to press at the beginning of the second half but frustration crept into their game at the failure to score a deserved second goal.

Lafferty completed an unwanted hat-trick when he slotted in from a Shiels cross, only for the big striker to hear the familiar sound of referee Vlado Glodjovic's whistle, this time for offside.

Joubert made good saves to keep out shots from Lafferty and Jamie Ward before Brunt wasted an excellent opportunity six minutes from time.

Davis provided the the throughball to send the midfielder clear but his low strike hit the outside of the woodwork.

It was a costly miss as Luxembourg snatched a unlikely draw two minutes later when Da Mota's shot cannoned off McGivern and past a stranded Carroll.