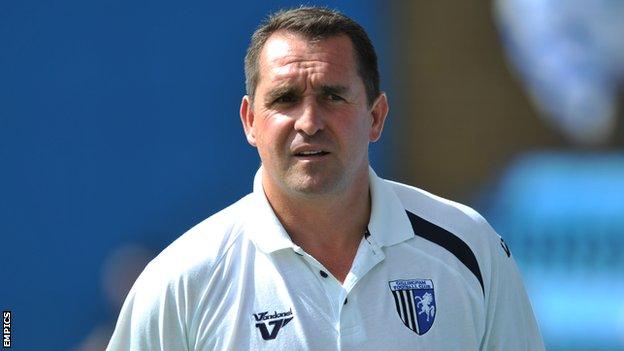 Gillingham manager Martin Allen says he would have liked the opportunity to remain in charge of Barnet.

He told BBC Radio Kent: "I really did want to be the manager of Barnet. I thought it was going to be a great opportunity and I wanted to take it on.

"I got an email telling me I wasn't getting the job. They wanted to go down a different route. I was disappointed."

Allen was appointed Gillingham manager in July and returned to Underhill for the first time on Saturday.

His new side ran out 3-1 winners to remain at the top of League Two, but Allen says it brought back the memories of his time in charge of Barnet.

"When the opposition fans start singing your name, it's magic," he continued.

"The last time I was here was when we beat Wimbledon 3-0 on the penultimate game of the season.

"The place was full up and it was a day I'll never ever forget.

"That was the first game back after I'd left to go to Notts County the year before. The players and supporters were fantastic and I was very proud.

"To stay up at Burton on the last day of the season was amazing, I was so happy."

Allen also said he felt he could have helped Barnet to progress, had his third spell in charge in north London been extended.

"I felt I owed them something because I walked out on that critical stage," he said.

"[With] the geography of being so close into London to get us loan players and some experienced players, [I could] put together a team to challenge for the play-offs.