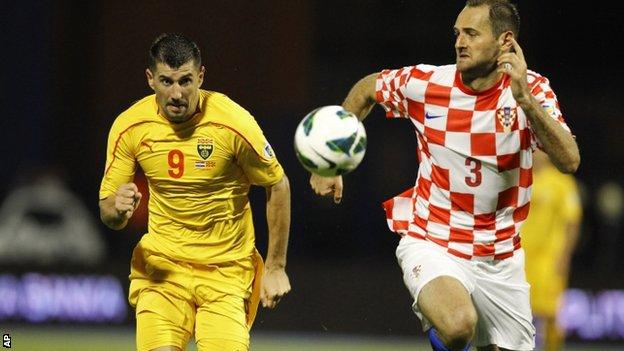 As the dust settled on Glasgow's south side on Saturday evening, a few miles along the M8 the Macedonian squad swaggered into the arrivals hall of the city's airport.

Another confident Eastern European side, who like Serbia when they arrived in Glasgow, believe they can gain World Cup qualifying points at Scotland's expense.

But, while not as glittering a castlist as their neighbours took here for the 0-0 draw on Saturday, Macedonia have enough in their squad to cause problems.

The proof lay in Zagreb's Maksimir Stadium on Friday night, when Croatia substitute Nikica Jelavic scored for the top seeds six minutes after coming on.

The goal was simply worked: Real Madrid's Luka Modric dinked a ball to the right of the six yard box, Mario Mandzukic headed back across and the former Rangers man nodded in from close range.

That provided documentary evidence of a Croatia win, but it was scarcely what the Macedonians deserved.

The visitors had chances and could have had a penalty as well before Everton striker Jelavic scored.

But, a look at the head-to-head between Croatia and Macedonia shows a host of close encounters.

A look at the head-to-head between Scotland and Macedonia and a painful reminder of the last World Cup qualification campaign leaps off the page and hits you between the eyes.

A year on from the spirit-lifting, chest-pumping win in Paris; the image of George Burley, sleeves rolled up in the baking Skopje heat, unable to lift his side above mediocre springs to mind.

The 1-0 defeat was Burley's first competitive game in charge and the Scots struggled to recover from the wound inflicted by it.

He had gone with two strikers that day, but, spooked by the heat, Scotland succumbed.

The only other meeting happened exactly a year later as the heavens opened over Hampden.

A 2-0 home win; McFadden's mazy solo strike, a ray of hope that would later be extinguished by the Netherlands, remained alive.

However, on closer inspection, Macedonia had been the better side for a large part of the game and forced then-number one Craig Gordon into several crucial saves.

For all their potential as an awkward opponent, Macedonia finished with just seven points.

Since then, Euro 2012 qualification yielded only two wins - against Andorra - in the group that Republic of Ireland would qualify from.

Former Yugoslav international defender Cedomir Janevski took the reigns in the wake of that shock announcement.

The 55-year-old will pick a side similar to the one that eventually lost in the Croatian capital.

Central to that is the ever-important Goran Pandev, a man more powerful in his country than the coaches given Srecko Katanec - who masterminded the win over Burley in 2008 - was fired after an alleged altercation with the Napoli man.

Twenty-nine-year-old golden boy Pandev - who has 25 goals for his country and hit the bar on Friday - played his usual role against Croatia but was joined in the forward ranks by Stevicka Ristic of South Koreans' Suwon.

There were lots of attacking options, certainly for a side ranked 97th in the world going to the one ranked 87 places above them.

Macedonia are fairly solid in defence, with new West Brom loan signing Goran Popov at left-back and experienced Mainze centre-half Nikolce Noveski still in the team, having faced Scotland twice before though pace may give him trouble.

A player that goalkeeper Allan McGregor will remember is Maribor midfielder Agim Ibraimi, who scored against his Rangers team in Slovenia in last season's Europa League play-offs.

Craig Levein will have to decide whether to open up against the supposed group minnows, but star man Pandev has a warning for him and the Tartan Army.

"In Glasgow we are going for a win, not a draw," he told Macedonian sports website Ekipa.

"We have to start thinking about winning games and not just be satisfied with good performances because it is obvious that we can match up against the best teams in the world.

"If we play as we did against Croatia, with a bit stronger fight and determination, then I believe the result will come to us."

Expect another stuffy encounter at Hampden on Tuesday.