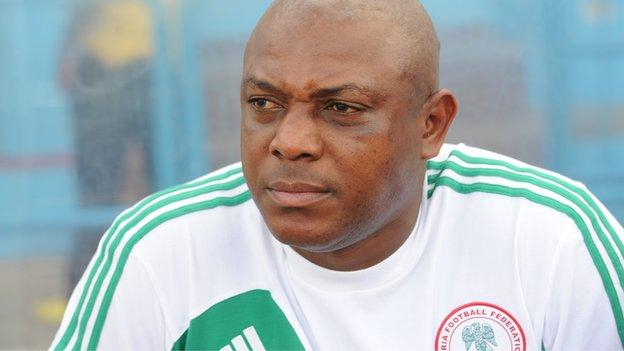 Nigeria coach Stephen Keshi wants his players to show more commitment and professionalism or stay away from the squad.

Super Eagles players received a dressing down from Keshi after slacking off in the second half of their 2-2 draw with Liberia in a 2013 Africa Cup of Nations qualifier.

"Sometimes I feel the right mental attitude and hunger is lacking in our game and I won't condone that," Keshi told BBC Sport.

"The body language must change and must correlate with our game plans.

"We have a very simple approach and we expect everyone to understand and respect that at this level."

Nigeria failed to qualify for the last African Cup of Nations in Equatorial Guinea and Gabon, which led to the sacking of Samson Siasia.

Former international captain Stephen Keshi, who took over last year, has warned his under-performing stars to shape up.

"I would prefer players to stay away and say they cannot make it - than for them to come and show Nigerians that we are not serious," Keshi continued.

"With this attitude on the pitch from the top professionals who are in this collection, we won't excel at the Nations Cup, that is what we want to stop."

Keshi, who led Nigeria to the 1994 Nations Cup title in Tunisia, the last time the Super Eagles won the tournament, also shed more light on the absence of Chelsea's John Mikel Obi.

"I recall that when we thought we were going to play on a synthetic pitch; I called Mikel Obi and he said it's not healthy for him to play on such a pitch, that is the type of maturity and honesty I want from all national team players," he said.

"Any player who cannot make it in time should just stay away, because we need all the time we can get to blend for our games, because the Nations Cup is just around the corner."

Keshi has been ruthless in his selection policy - omitting Peter Odemwingie, Taye Taiwo, Mikel, John Utaka and Dickson Etuhu from the team.

Nigeria will host Liberia in the second leg of the qualifier in Calabar on the weekend of 12-14 October, with the eventual winners qualifying for the 2013 Nations Cup.