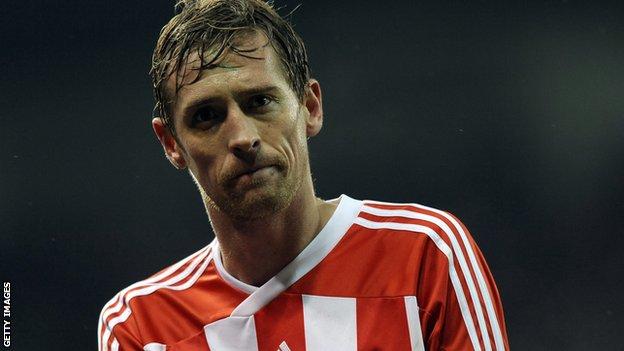 Peter Crouch is in England exile after refusing to be on manager Roy Hodgson's Euro 2012 stand-by list.

The Stoke City striker, 31, was overlooked for the World Cup qualifiers against Moldova and Ukraine, despite injuries to Wayne Rooney and Andy Carroll depleting Hodgson's resources.

Hodgson said: "I selected him for the Euros but he didn't want to come.

"He made it clear that unless he was in the squad he didn't want to be considered."

Hodgson continued: "As a result, we've selected squads since that time when I felt I didn't need him here. I'm not going to bring him here to fill up the bench. The day Crouch gets in the England squad is when I think he should be in the original 23."

Crouch, who believes his new partnership with Michael Owen at Stoke could revive his international ambitions, has scored 22 goals in 42 appearances but has not played for England since 2010.

However, Hodgson said that both Crouch and Aston Villa striker Darren Bent, who is also out of favour at the moment, could still have an international future.

"They have both played for England in the past. Darren Bent was injured for a large part of last season and the new season is only three Premier League games old. He is a player we'll be following," said the manager.

"I was thinking Andy Carroll and Wayne Rooney when I put this squad together but I lost Rooney a week before and then Carroll at the last minute. I've not dismissed anybody, even Peter Crouch."

365 comments
Back to top
unknown