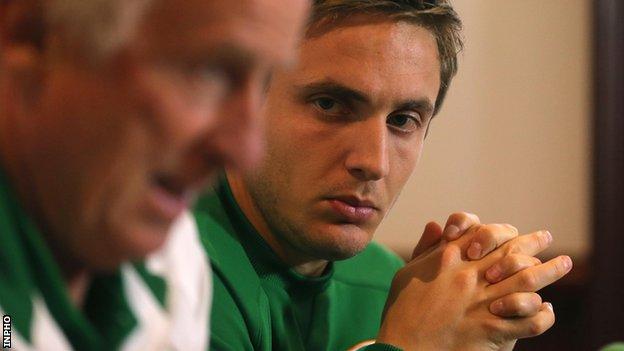 Manager Giovanni Trapattoni told McClean he was lucky to have an Ireland career after Friday night's outburst.

McClean had described his lack of action in the World Cup qualifier with Kazakhstan as a "joke" and also swore.

"We said to him straight away - it's not acceptable," said Doyle.

"We found out about it pretty much straight away."

Despite the controversy, Doyle claims that the affair could be of benefit to McClean's international career.

"We ended up joking about it the next day," the 28-year-old added.

"It's been good because it has probably got him integrated in to the group a bit more.

"We were thinking of getting him to sing in front of the group again - that made him nervous enough. I think he nearly cried the first time he did it.

"A few of the lads find it quite traumatic when they stand up in front of us so it might have been good for him."

McClean will again start on the bench in Tuesday's friendly against Oman at Craven Cottage when Doyle will captain the Irish.