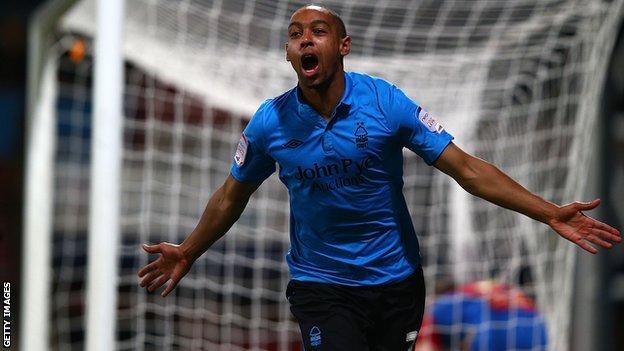 Kagisho Dikgacoi had given the hosts the lead earlier in the second half when he headed in Owen Garvan's corner.

Forest's Adlene Guedioura was then sent off for kicking out at Mile Jedinak.

However, Blackstock secured the draw with nine minutes remaining as he prodded the ball under Palace goalkeeper Julian Speroni.

The draw means Forest have now gone six league games without defeat - drawing four and winning two - but they will count themselves lucky after a poor start.

Jonathan Williams then tested Forest goalkeeper Lee Camp with a strike from 20 yards before Zaha fired over from a similar distance.

Dikgacoi got Palace's deserved opener soon after the break before Guedioura, who replaced the injured Sam Hutchinson in the first half, was booked and then later sent off for a foolish kick at Jedinak.

Blackstock replaced Billy Sharp in the 73rd minute and shortly afterwards was played through by Simon Cox to grab the equaliser.

The second-half substitute was denied a winner soon after by Speroni before Peter Ramage forced Camp into an impressive save at the other end.

"They had enough of the game, I suppose, to warrant three points.

"We came in at half-time thinking that although we were a bit bitty, they didn't actually create anything. It was probably down to our poor passing, really, that allowed them opportunities.

"Whether we'd have got a point or three points, I'd have said the same, they stuck at it and in a strange sort of way, the sending off probably gave us the spark that we needed.

"That's definitely a point won rather than two points dropped."