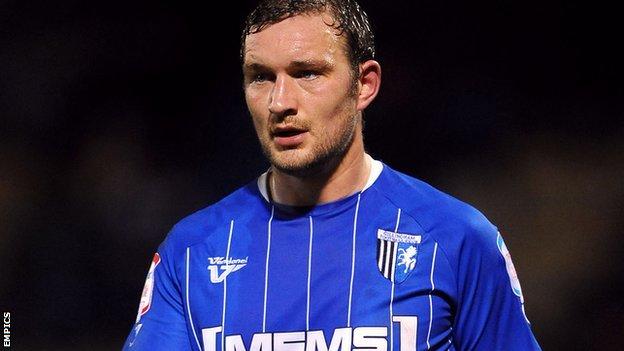 League Two leaders Gillingham beat Southend to remain top of the division despite ending the match with 10 men.

Danny Kedwell scored the only goal of the game when he converted a penalty after Bradley Dack had been brought down in the area by John Spicer.

But substitute Dack was then sent off for a bad challenge on Mark Phillips.

Southend, who had goalkeeper Paul Smith carried off early on, had chances but Britt Assombalonga headed over and Stuart Nelson denied Gavin Tomlin.

"What a night it was. It was backs to the wall but we defended rigidly. All of them worked hard.

"They're fit. When they're fit they make better decisions. We had a young team out there. It was a great win and a great atmosphere.

"They'll probably be in the play-offs. Everyone to man stood their ground and battled right to the end."

"It's a difficult place to come, they're the form team at the moment but their goalie had more saves to make than our goalie.

"The penalty was soft - it was just two people coming together in the box.

"(We should have had) one at the other end, he's claiming Tims (Michael Timlin) lowered his head, he didn't lower his head that much and the boy's raised his foot and whacked him in the face. In the end those decisions are key in the game."