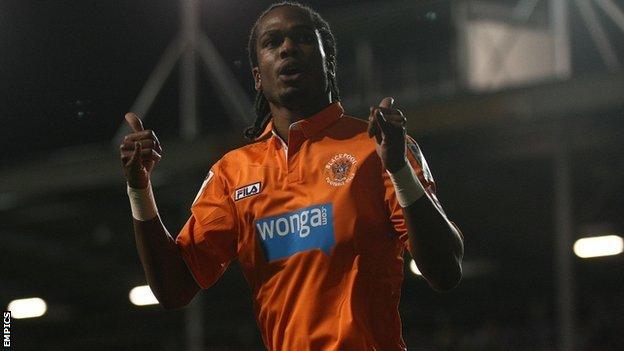 Blackpool kept up the pressure on Championship leaders Blackburn with a convincing win over Middlesbrough.

Jason Steele had already denied Thomas Ince when Nathan Delfouneso latched on to a through ball from Gary Taylor-Fletcher before shooting home.

Delfouneso shot from 18 yards to double the Seasiders' lead but Andre Bikey headed a goal back before the break.

Ince then struck before Elliot Grandin converted a late penalty after he had been fouled by Bikey.

Ince's goal came after a pass from Delfouneso, who is on loan from Aston Villa and enjoyed a memorable full debut.

The striker thought he had scored a hat-trick after heading home a cross from Grandin late in the game but his effort was ruled out for offside.

The victory is Blackpool's fourth in six Championship fixtures and means Holloway's team have made their best start to a league season in 57 years.

It is also a fifth successive home league win for the Seasiders, who are showing no signs of a hangover after defeat in last season's play-off final.

The result might have been different if striker Ishmael Miller had not wasted a good chance to equalise after 34 minutes.

But by that stage Steele had already saved from Taylor-Fletcher, Delfouneso, Stephen Crainey and Tiago Gomes.

And shortly after Miller's miss, Delfouneso added his second.

Bikey clipped the bar with a header shortly before finding the net after Grant Leadbitter put the ball back into the box.

But Blackpool's two goals after the restart means the search for an away point continues for Tony Mowbray's side, whose form away from the Riverside is in sharp contrast to their three successive home victories.