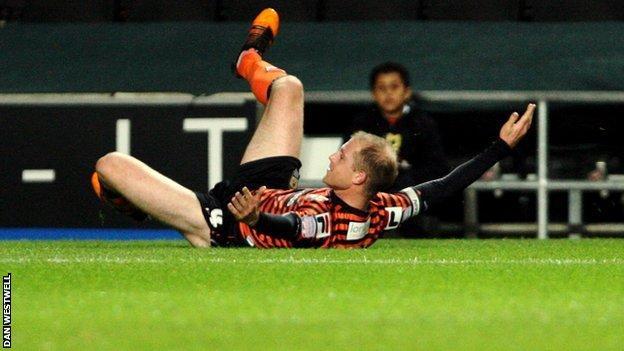 The Magpies had the better of the first half and Yoann Arquin had strong penalty claims waved away before Neal Bishop's 20-yard strike put them ahead.

MK Dons took control after the break and O'Shea's curling shot made it 1-1.

The hosts piled forward but Notts were able to withstand considerable late pressure to earn a point.

But the visitors started to take control after a quarter of an hour and could have been leading by more than a single goal at the interval.

Arquin hooked an effort just wide and had a decent penalty shout ignored while Alan Judge also went close with a free-kick.

But Bishop's superb dipping strike into the bottom corner - the first MK Dons have conceded at home this season - was all they had to show for their efforts.

A much improved home side upped the tempo in the second half and levelled when O'Shea cut inside from the left and curled a glorious right-footed effort past Bialkowski and into the far corner.

Notts held on but slip to third place in the table while fellow promotion-hopefuls MK Dons are in seventh spot, level on points with five other teams.

"We weren't very good in the first half but their goal was a deflected shot from 35 yards and that's all they had.

"Maybe I got the team wrong in the first half, but the boys got me out of trouble in the second half.

"We had a game plan - it maybe nullified some of our strengths, but they had strengths we wanted to nullify.

"We looked comfortable but didn't have a cutting edge. In the second half the forwards got hold of the ball, the wide players became effective and we were at our fluent best again."

"I think the players enjoyed that, they revelled in the fact that they knew what their roles and responsibilities were. They knew individually what man they had to mark and lock onto.

"And then they knew that they still had that freedom in their play that when we got good possession of the ball, go and play, go and express yourselves, go and enjoy yourselves."