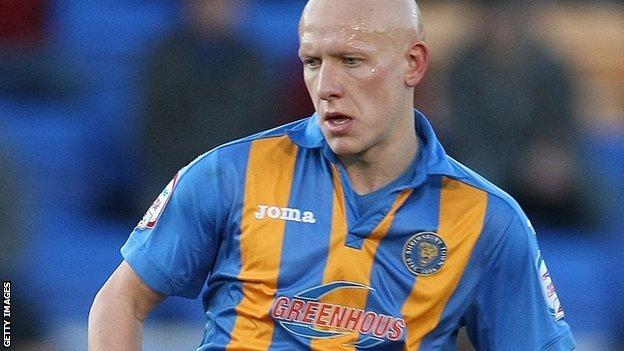 Shrewsbury Town cruised to their biggest win of the season to sentence managerless Coventry City to a fourth straight defeat.

Matt Richards diverted in Parry's free-kick to double the lead on 21 minutes.

Town struck twice in two minutes with a Richards penalty before Marvin Morgan ran clear for the fourth, John Fleck pulling one back with a late penalty.

The Sky Blues' spot-kick was for a foul from Coventry old boy Jermaine Grandison on Gary McSheffrey.

But it was all they deserved after a poor, error-strewn performance.

Graham Turner's Town had the chance to have won by more. They had led 4-0 just past the hour mark when Morgan struck a stunning fourth goal barely 60 seconds after Richards had sent Murphy the wrong way when Luke Summerfield was fouled inside the box by William Edjenguelle.

Coventry are expected to make an announcement on their managerial vacancy on Wednesday.

But it did not look a good omen for caretaker boss Richard Shaw as the Sky Blues suffered their fourth straight league defeat under his command.

Fleck's penalty actually prevented Coventry from going bottom of League One - but it looks like a tough rebuilding job for whoever gets the job.

And former Rotherham United and Barnsley boss Mark Robins - one of the three men on the shortlist given a second interview - has now emerged as the hot favourite to take over.

"After the setback of losing our long unbeaten run against Scunthorpe on Saturday, we were looking for a response and we could not have asked much for more than that.

"The only way you can react is what we've done tonight and I've got to be very pleased.

"We've actually played better than the points we've got so far. We murdered Tranmere here and they're top. But the early goal going in settled us and tonight, for once, the goals went in."

"Joe Murphy should have done a lot better with the cross for that first goal, as should the defenders, and that just set the tone for the whole performance, which was embarrassing.

"Whether it was lack of motivation, lack of desire or whatever you want to call it, I think the players let themselves down as well as the supporters that turned up, and yes, I feel let down too.

"You say all the right things before the game and then again at half-time but, for whatever reason, they didn't do it."