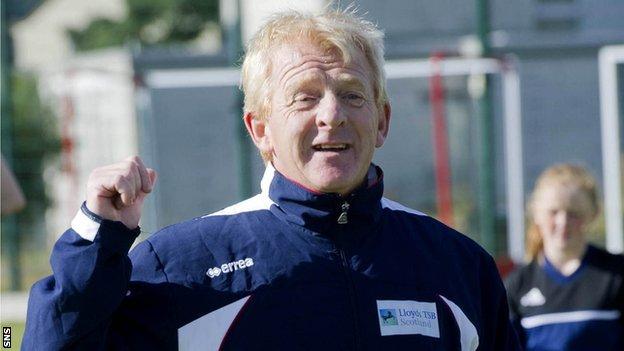 Former Celtic and Middlesbrough boss Gordon Strachan has told BBC Scotland he turned down the opportunity to be an international manager.

The Scot said the offer came "not in this country, but somewhere else".

Strachan remains involved in coaching, as well as working as a television pundit, and is open to offers of work.

"If somebody feels my talents are good enough to help their team - coaching, director of football, management - then I'll look at it," he said.

"Someday, somewhere there'll be a job that pops up. I'm quite happy doing what I'm doing just now."

Strachan watched Scotland's 0-0 draw with Serbia on Saturday and defended his country and coach Craig Levein after the players were booed at full-time.

"I travel round Britain watching football games. If the home team doesn't win, everybody boos," he added.

"That's nothing new so I don't know why we're making a big deal about 50, 60 people shouting or booing. It happens everywhere.

"In international football now, there's very few chances made because there's not many crosses going into the box, it's all built up.

"Scotland made four or five chances. If they take one, it's a terrific performance. It's called 'controlled', it's called 'defensively great'.

"I played in many World Cups where we didn't play as well as that and scraped through and it was hailed as a 'great victory'. No it wasn't, we were a wee bit lucky on the night.

"I agree with Craig to a certain extent, there is a mass hysteria but that's Scotland. We're hysterical about anything, that's the way we are as people. Craig knows that, it comes with the territory.

"All you have to do as Scotland manager, or any manager, is win the game of football."