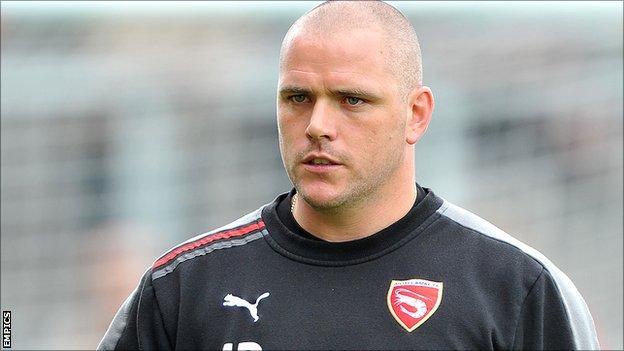 Jim Bentley says Morecambe must not dwell on their Lancashire derby defeat against Fleetwood Town on Saturday.

Fleetwood won 4-0 at the Globe Arena with Jon Parkin scoring a hat-trick.

"It was a massively disappointing day for myself and the fans because the lads didn't give them what they wanted," said the Shrimps manager.

All four of Morecambe's competitive wins so far this season have come away from home, while the Shrimps have collected just one point from a possible nine at the Globe Arena

Morecambe have made a solid start to the season picking up impressive away wins at Exeter and Bristol Rovers.

But their home form remains a concern. They remain winless on their own ground this season and have won only 12 of their 49 league games since moving into their new stadium in August 2010.

And Saturday's defeat was their heaviest at home since leaving Christie Park.

Speaking to BBC Radio Lancashire, Bentley continued: "Sometimes you've got to hold your hands up and say you were beaten by the better side, which we certainly were on Saturday.

"Fleetwood were very organised. They've got good players who know the game and know how to get their noses in front.

"Once they did that, I thought they were more than worthy winners, but we've helped them along the way with individual errors that have cost us."