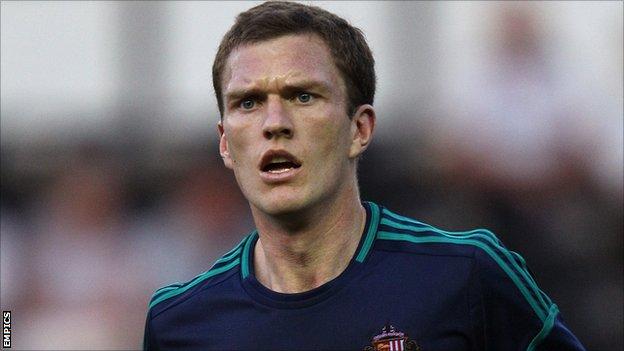 Sunderland utility player Craig Gardner says he will continue to operate in whatever position is required by manager Martin O'Neill.

The 25-year-old has spent most of his career in central midfield but has featured at full-back for the Wearsiders in recent games.

"If you're in the starting 11 then you should be happy with that."

Gardner continued: "Why should we moan about playing in a different position when they're prepared to pay to watch us play?"

Arrivals such as Adam Johnson, Steven Fletcher and Carlos Cuellar have added to the battle for a first-team start at the Stadium of Light, while returning players such as Phil Bardsley will add to the player pool.

"It's competition all over the pitch, if it wasn't we wouldn't be competing for the top eight," Gardner said.

"We want to put our own players under pressure because we don't want people thinking they will automatically be picked.

"It's not healthy, the lads are not going to improve."

Birmingham-born Gardner had a difficult start to life on Wearside, his first taste of football away from his home city after spells at Aston Villa and Birmingham City.

"When I first came here my head wasn't in the right place," Gardner added.

"I just wanted to finish training and get home. That was me missing home really, but I had to man up.

"Martin came in and I've known him a long time, it's about seven years now, and that helps.

"I know what he wants in the changing room and on the pitch and hopefully I can give that to him."

You can hear the full interview with Craig Gardner in the build up to commentary of Sunderland v Liverpool with BBC Newcastle on Saturday, 15 September.