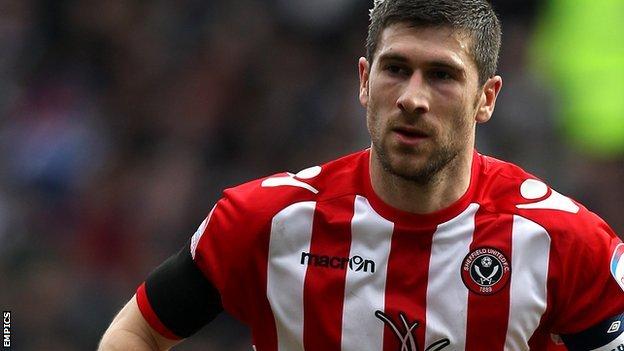 The 30-year-old left the Blades for Australian side Central Coast Mariners on transfer deadline day.

"I've had a fantastic time here and I didn't want it to end on a bad note and thankfully for me it hasn't," he told BBC Radio Sheffield.

"We came to an amicable agreement over my contract and it's allowed me to move on fulfil an ambition I've always had."

He added: "I'll miss all the friends that I've made and I'll be back at the end of the season to watch a couple of the games.

"I went to the training ground to see the lads and the staff last week and that was pretty emotional and I'm going to the Bury game on Saturday, which will be a great chance to say goodbye to the fans."

Blades boss Danny Wilson revealed at the start of the season that Montgomery was not available for first team selection because of financial reasons.

Having made his debut for the Bramall Lane side against Norwich in October 2000, the midfielder went on to make 351 league appearances for the club.

Ahead of moving to Australia next Monday, he is looking forward to a new chapter in his career.

"I just want to be successful and this is something that I've always wanted to do," he continued.

"It'll be a totally different experience. They're in the Asian Champions League so we'll be playing in China, Japan and South Korea.

"I'm excited for a new challenge and a totally fresh start."