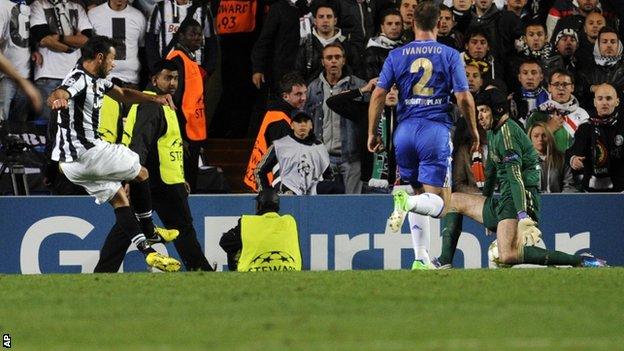 Chelsea failed to open their defence of the Champions League with victory as Juventus staged a stirring comeback to earn a draw at Stamford Bridge.

But the Italian champions, unbeaten domestically in 42 Serie A matches, demonstrated their pedigree and strength to mount a recovery and earn a point.

Arturo Vidal's goal put them back in contention before half-time and substitute Fabio Quagliarella ensured the points were shared with an equaliser nine minutes from time.

Oscar took the honours for Chelsea with a performance of rich promise on his first start since his £25m switch from Internacional. And the highlight of this opening Champions League group game was the moment the 21-year-old won the hearts of Stamford Bridge with his magnificent second goal.

But even with the lead Oscar gave them, Chelsea were never able to exert complete control and it was no surprise when Juventus eventually drew level via Quagliarella's cool late finish.

Before Oscar transformed the complexion of this game, Juventus had created the two best openings of the half. Chelsea keeper Petr Cech saved at the feet of Claudio Marchisio after he beat the offside trap and Mirko Vucinic shot wastefully wide from the angle after he was played in by Vidal.

Oscar had been on the margins of the action early on - but made himself an instant hero with the Stamford Bridge crowd.

He gave Chelsea the lead with a 20-yard shot that took a crucial touch off Leonardo Bonucci to take it away from the grasp of Buffon.

It was a strike that carried a hint of good fortune but the second was a testimony to his touch and technique as he turned from 25 yards before curling the most precise of right-foot finishes high beyond the stretching Buffon.

Juventus deserved something for their first-half efforts and they were rewarded seven minutes before half-time as Vidal's low shot crept past Cech into the bottom corner.

Italy keeper Buffon illustrated his enduring quality in the opening moments of the second half as he dived low to his right to turn away Branislav Ivanovic's shot, then showed good reflexes to divert Frank Lampard's free-kick to safety.

Oscar had been less influential after the break and shortly after being felled by Bonucci he was replaced by Juan Mata to a resounding ovation from Chelsea's supporters.

Mata soon had a glorious chance to ensure victory as his one-two with Eden Hazard carved the visitors apart, but he fired into the side netting.

It was to prove costly as Juventus continued to play with ambition in search of at least a point and they were level with nine minutes left. Jon Mikel Obi lost possession and Marchisio's pass allowed Quagliarella to escape John Terry's attentions and slide a finish under Cech.

He almost made the turnaround complete with an effort from the edge of the area that clipped the top of the bar with Cech beaten, but Chelsea survived and claimed a point.