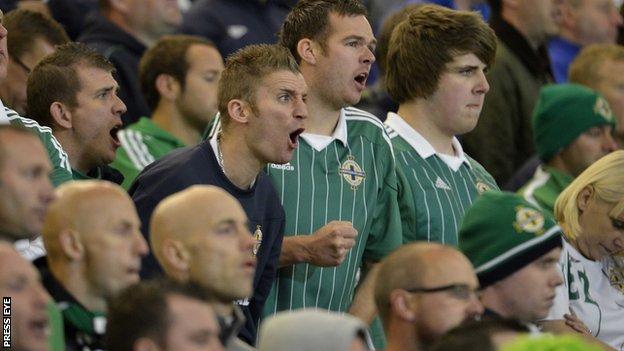 Once again, the morning after the night before brings, not a hint of a bright new dawn for the Northern Ireland international team, but a harsh dose of reality.

Shuffling up the railway bridge steps having departed a depressing Windsor Park, the feeling among the fans was "well there goes another campaign."

Manager Michael O'Neill, in his first qualifying assignment as NI boss, had targeted three points from the first two games - the testing trip to Russia and Tuesday's home game against Luxembourg.

It was a bonus which Luxembourg celebrated as if they had won the World Cup. For O'Neill's men, a cruel blow, but one they concede was largely of their own making.

They should have been out of sight way before the calamitous conclusion.

Chances were wasted and far too many promising Northern Ireland attacks were flagged offside.

Northern Ireland had started with a real spring in their step and were rewarded with a nicely worked and sublimely finished 14th-minute goal, a maiden international strike for Dean Shiels.

For a while, the tempo was sustained and Northern Ireland looked as if they would add more goals - not to be.

Into the second half, eternally optimistic Kop stand fans remained in raucous voice, Luxembourg threatened rarely, and it looked as if the essential victory would be secured - even if only by a slender 1-0 scoreline.

It should have been 2-0, but Chris Brunt let a great chance slip by when his shot skimmed off the near post.

Then, when Luxembourg seemed to be seeing more of the ball, the nagging realisation that the job was far from done.

Northern Ireland were about to pay dearly for a sub-standard second-half showing.

It was a cruel blow when Da Mota's shot took that wicked deflection off Ryan McGivern to leave NI goalkeeper Roy Carroll helpless.

A stunning setback, one which many see as a fatal blow to any hopes of contending for a place in Brazil 2014.

Boss O'Neill faced up to the interviews, conceding NI had not played well enough in the second half and had surrendered too much possession. There was no disguising the disappointment.

So, over the railway bridge and into the car. The airwaves inquest on Radio Ulster, naturally, didn't lift the mood.

Former players, those from the glory days of 1982 and 86 World Cup finals, were quizzed about what had gone wrong and what could be done about it.

Much head scratching, but few answers.

Perhaps, it is the reality of modern-day world football. For teams like Northern Ireland, and Scotland and Wales too, qualifying for a major finals seems to be getting further away. An apparent aspiration, but no longer a realistic target, more a dream?

It is Portugal away next for Northern Ireland, then Azerbaijan at home on 14 November. The fans will be back, over the bridge and onto the Spion Kop.

Many of them have seen this all before - and will again.