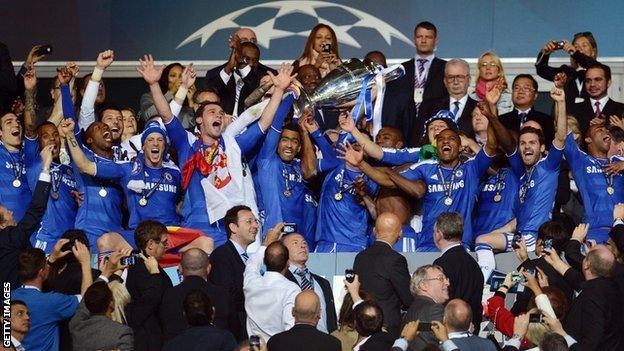 Chelsea begin the defence of their Champions League title against Juventus knowing that no club have successfully retained Europe's top prize for more than 22 years.

The last of the elite band of eight teams to do so were AC Milan, with their victories in 1989 and 1990 when the competition was in its former guise of the European Cup.

Clubs who have retained the European Cup

Not even the Barcelona team which won the Champions League in 2011, and regarded by many as the greatest club team ever, could achieve the feat of back-to-back wins.

"I wouldn't even say they are in the top four favourites to win the competition. If they got to the semis that would be a really good effort.

"That's because Chelsea are very close to a new team in many ways. The style is completely different. The personnel in many ways is different as well, in particular, from midfield to the front.

"To make all those changes and then to hope to go and win the Champions League is asking a lot."

Winning the competition once was hard enough for Chelsea, with a final defeat on penalties by Manchester United and four semi-final exits in their eight attempts before last season's success against Bayern Munich.

"You need to get a team that is built, get to know each other and then peak. After that you need to get a little luck as well so most of those things don't apply to Chelsea this year."

He did what his predecessors of Claudio Ranieri, Jose Mourinho, Avram Grant, Luiz Felipe Scolari, Guus Hiddink, Carlo Ancelotti and Andre Villas-Boas could not do on the European front.

"To win [the Champions League] twice in a row, it's proven so far impossible, because it's so competitive," said Di Matteo.

"Every opposition is going to play with extra motivation playing against the title holder. So it makes our lives more difficult."

"If anything, Chelsea are going to find it tough to get out of the group," said Nevin.

"And, of course, if you are defending champions at anything you are there to be shot at and everybody will be hoping to do that with them."

There has been promise this season from the way Di Matteo's side have started the Premier League season, they are top with three wins and a draw from four games.

However, there is also a reason for caution following the display in the Super Cup final when they were dismantled by Atletico Madrid and the striking prowess of Radamel Falcao.

"The biggest help for Chelsea is that they have no pressure on them. Some people may disagree as they are defending champions but I think it is the reverse," continued Nevin.

"They have been trying for so long and so hard to win the Champions League that they have now done that and they can relax and enjoy the competition a little bit more than they have in the past. That may help them."

He added: "Winning it back-to-back is an extraordinary thing to try to do. It's no surprise that it is done so irregularly and that's great because that's the way it should be.

"You need to get a team that is built, get to know each other and then peak. After that you need to get a little luck as well, so most of those things don't apply to Chelsea this year."