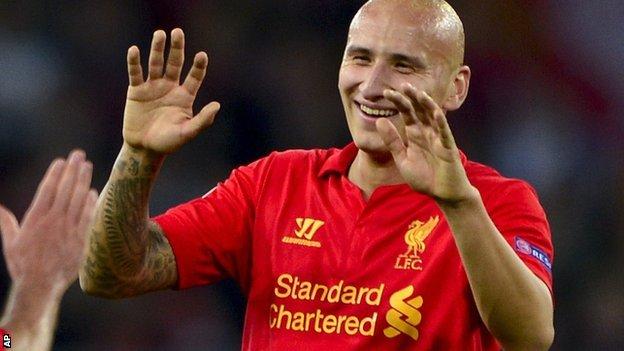 Juhani Ojala inadvertently headed into his own net to put Liverpool ahead before poor defending let Raphael Nuzzolo fire in an equaliser.

Reds debutant Andre Wisdom's header restored the visitors' lead, only for Ojala to nod home and Gonzalo Zarate to chip in to put Young Boys 3-2 up.

A Sebastian Coates header and Shelvey's strikes then gave the Reds victory.

Liverpool's tally is the first time they have scored more than four in a European match since they posted the record Champions League victory in November 2007 with an 8-0 win over Besiktas.

Substitute Shelvey, 20, finished off an incisive Liverpool move with a first-time right-footed shot for his first and sealed the win when he surged towards goal before powering in a left-footed effort.

While Liverpool manager Brendan Rodgers may be unhappy with the defensive aspect of his team's play, those concerns will be tempered by the impact of midfielder Shelvey and the experience gained by the other youngsters in his side.

A second string Liverpool had gone into the match with Young Boys manager Martin Rueda warning that his Swiss side could "embarrass" their visitors after the Reds left eight first-team regulars on Merseyside.

But it was Young Boys who were soon left red-faced in almost comical circumstances.

There seemed no danger when Stewart Downing delivered a cross from the right only for Christoph Spycher's clearing header to ricochet off team-mate Ojala's head and into the home net.

Rueda's side almost responded immediately when Raul Bobadilla showed a lovely touch to take down a lofted ball before seeing his shot palmed into the side-netting by keeper Brad Jones.

Liverpool teenagers Suso, 18, and 19-year-old Wisdom have come through the club's academy and were both making their first-team debuts, along with summer signing Oussama Assaidi, 24.

Assaidi carried a threat on the left-wing and the silky Suso showed a glimpse of his potential when he jinked into the area before failing to find an unmarked Daniel Pacheco with his cut-back.

Liverpool appeared comfortable and had themselves to blame for allowing Young Boys back into the game.

Reds left-back Jose Enrique intercepted a chipped ball only to stab his clearance to Nuzzolo, who gleefully accepted the gift by firing into the roof of the net.

Wisdom climbed well to head home from Nuri Sahin's corner but Young Boys sensed a vulnerability at the back for Liverpool, and Alexander Farnerud's curling shot struck the post soon after.

The uncertainty of veteran Jamie Carragher as well as the inexperience of 21-year-old Sebastian Coates continued to give Liverpool problems in central defence and they were duly punished in the second half.

Young Boys had come out after the break with a renewed vigour and were rewarded when Ojala placed a precise header into the bottom corner to level.

The Swiss side went ahead after Bobadilla outmuscled Carragher and slid a pass into the run of Zarate, who dinked the ball coolly over the on-rushing Jones.

The lead did not survive long in an open, error-strewn game, however, as Coates headed in a corner on his European debut to equalise for Liverpool.

And as the teams continued to trade attacks, the introduction of Shelvey and striker Fabio Borini gave Liverpool the edge, the former especially as his two well-struck goals decided the match.