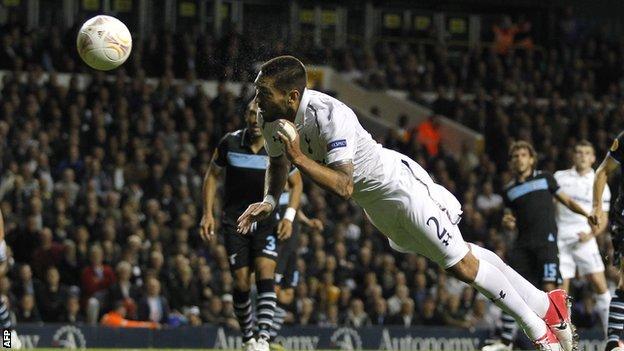 Tottenham Hotspur started their Europa League campaign with a goalless draw after failing to force a breakthrough against a stubborn Lazio side.

Clint Dempsey had a first-half header ruled out in a marginal offside decision, while the visitors struck the bar through Alvaro Gonzalez's volley.

And Spurs were left frustrated when Steven Caulker's late header found the net but was disallowed for pushing.

Lazio boss Vladimir Petkovic will be familiar to Tottenham fans. He led Swiss side Young Boys to a 3-2 first-leg win over Spurs in the 2010-11 Champions League play-offs. The joy was short lived as Spurs won the return leg 4-0

But, despite numerous chances, the game lacked the moment of magic the former England midfielder once produced with such frequency.

Spurs boss Andre Villas-Boas had suggested his team would hold the Europa League in a higher regard than last season when, under Harry Redknapp, they failed to progress past the group stage.

And the Portuguese's line-up reflected that, with only three changes made to the team that beat Reading 3-1 in the Premier League at the weekend.

Goalkeeper Hugo Lloris was handed his first start since joining from Lyon and would have been relieved to watch Senad Lulic's low cross elude Miroslav Klose by inches, when the slightest of touches would have given the visitors an early lead.

Tottenham responded but Lennon inexplicably opted to cross after Jermain Defoe's neat through ball looked to have put him in on goal.

Bale, having switched flanks with Lennon, then thought he had provided Dempsey with the opener.

Paul Gascoigne, who played for both sides, turned down the opportunity to attend the game for "personal reasons".

Both sets of fans could be heard chanting his name in the first half.

Lazio hope he can watch November's return fixture at the Stadio Olimpico.

The American, making his full Spurs debut, nodded in Bale's cross but the effort was ruled out in the tightest of offside calls.

Lazio, living up to the Italian reputation for defensive stubbornness, rode out a period of Spurs pressure and created legitimate chances on the counter.

Klose should have provided a more telling cross when he picked up Dembele's wayward pass, and the German international later uncharacteristically air-kicked at an opportunity on the edge of the Spurs box.

But the Rome side's finest moment came shortly before the break when Gonzalez latched onto Jan Vertonghen's headed clearance and struck a superb 20-yard volley against Lloris's crossbar.

Lennon and Dempsey were both denied at the start of a more open second half, with Lulic and keeper Federico Marchetti somehow managing to scramble the ball away as the Spurs pair failed to convert efforts from point-blank range.

Defoe had the ball in the net but Bale, who provided the cross, was correctly ruled offside.

And Villas-Boas made his frustration with the officials clear when Caulker, who put in a fine defensive display on only his second Spurs start, saw his header from Bale's corner ruled out for a push on Stefano Mauri.

Rather than urge the home side on, the decision sucked the energy out of the game and, an Andros Townsend effort aside, Lazio managed to stifle any Tottenham momentum to take a hard-earned point back to Rome.

"I think we did enough to get the win today. I am extremely happy with the performance and the effort that the players put in.

"You can't reprimand them for anything, they were outstanding, they managed to create enough opportunities to win the game.

"The team put the ball in the back of the net three times, but all the goals were disallowed by the ref, so it's a bit disappointing.

"It shows that we are on the right track to giving something back to the fans. We were superior against a team that is doing extremely well. We can be happy with that performance."