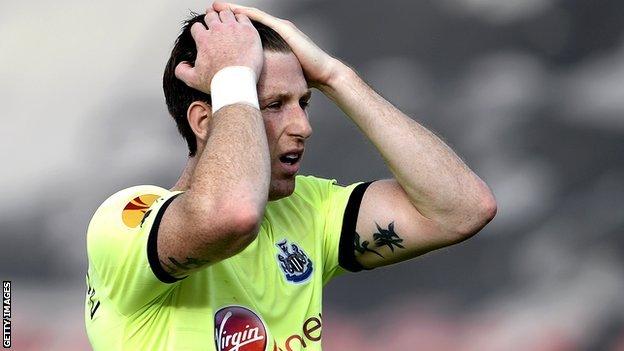 Newcastle hit the woodwork three times as they started their Europa League campaign with a goalless draw away to Maritimo on the island of Madeira.

Dan Gosling struck the foot of the post with a low drive on the half-hour.

And Shola Ameobi hit the bar with a curling shot, having earlier had a header pushed against the post.

Valentin Roberge's powerful header from a corner, nodded off the line by Davide Santon with 10 minutes to go, was as close as the Portuguese hosts came.

The game at Dos Barreiros stadium was Newcastle's first European appearance since their defeat in the last 16 of the Uefa Cup by Dutch side AZ Alkmaar in the 2006-07 season.

When 20-year-old Sammi Ameobi was introduced as a substitute in the 53rd minute he joined older brother Shola on the pitch to make the pair the first siblings to play for Newcastle in European football.

Manager Alan Pardew named the same four-man defence that played in the 2-2 Premier League draw with Everton on Monday, but otherwise made seven changes.

Haris Vuckic, 20, joined captain-for-the-night Ameobi up front, and there was a debut for left-winger Romain Amalfitano, who signed in the summer from Stade de Reims.

Newcastle's much-changed starting XI began slowly on a dry, difficult pitch in front of a sparse crowd at a half-built stadium, and Newcastle's Rob Elliot soon had to produce a fine save to deny Maritimo's Sami.

When a corner was swung over the dynamic midfielder connected with a volley near the penalty spot, but the visiting keeper impressively tipped it over the bar.

Newcastle's midfield in particular struggled to impose themselves, but the visitors' first sustained period of pressure nearly brought reward.

On the half hour three corners in two minutes caused havoc in the Maritimo area, betraying the home side's vulnerability in the air.

Newcastle centre-back Mike Williamson (pictured) then had his shot from the edge of the area blocked and, with the ball loose in the box, Ameobi's stooped header was bundled onto the post and behind by Salin.

The Dos Barreiros stadium in Madeira only has a 5,000 capacity for European games. Major redevelopment has halted because of the weak Portuguese economy.

From the resulting corner Gosling could not have come much closer, his rasping drive crashing against the foot of the post.

The woodwork saved the hosts yet again straight after the break. Ameobi dispossessed Joao Guilherme and charged forwards before unleashing a right-footed curling effort that rattled the crossbar.

But the lack of good fortune seemed to sap Newcastle's confidence as, in very hot temperatures 1,800 miles from home, their energy levels dropped along with their creativity.

Magpies boss Pardew brought on Sammi Ameobi to join older sibling Shola - making them the first brothers to appear on the same pitch for Newcastle in European football - in an attempt to inject some pace.

However, if anything Maritimo dominated the final 15 minutes and could well have won the game when a Goncalo Abreu corner was flicked on at the near post.

Roberge met the ball with a fierce header that cracked against the underside of the crossbar and was only kept out as Santon showed fine reactions to head the ball off the line.