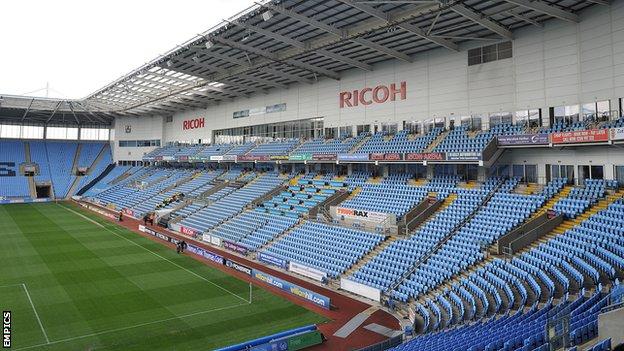 Managerless Coventry City have trimmed the shortlist for their current vacancy to three names.

Sky Blues development director Steve Waggott also told a fans' forum on Thursday night that they will now make an appointment next week.

The three candidates will be given a second interview at some point over the next few days.

Caretaker boss Richard Shaw, understood to be one of the three in contention, will carry on in charge until then.

Shaw, along with Lee Carsley, will be in charge of Saturday's trip to Tranmere, followed by Tuesday night's game at Shrewsbury - after which the Sky Blues board hope to have made up their mind over the new man.

The Sky Blues have received a high volume of applications for the position following the departure of Andy Thorn on 26 August.

Oxford boss Chris Wilder, 44, was initially installed as the front-runner for the job last week, but he is now only third favourite with the bookmakers.

Former Hull and Preston boss Phil Brown is among those to have been interviewed, while two former Coventry City employees Eric Black and Richard Money are also understood to have been contenders.

Black, who first arrived at the club as Gary McAllister's number two, was the Sky Blues manager for six months from December 2003.

Former academy director Money is also keen to return to management, 18 months on from his last job at Luton.

Winless Coventry are 21st in League One ahead of the trip to Prenton Park, after picking up just three points from their first five League One games.

The Sky Blues have so far lost their first two league matches under Shaw and Carsley, whose first game in charge was the 3-2 extra-time League Cup win over Birmingham City.