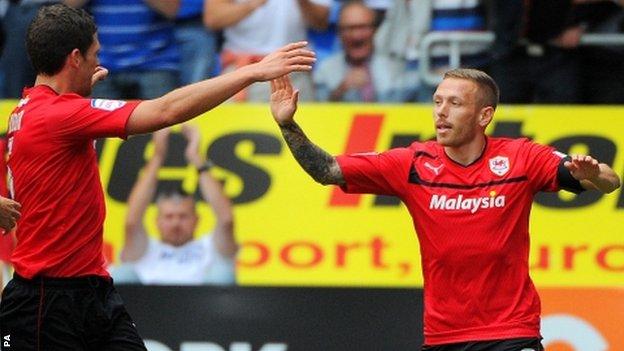 Craig Bellamy answered any doubts over his passion for Cardiff City with his cameo against Leeds United, according to manager Malky Mackay.

Bellamy played for the first time on Saturday since feeling compelled to deny rumours he was about to retire.

The 33-year-old scored a spectacular opener after coming off the bench to inspire Cardiff to a 2-1 victory.

"He's got a desperate willingness to play and to play for Cardiff, as you saw [against Leeds]," said Mackay.

A calf injury had prevented Bellamy from playing in Cardiff's previous two games, although a newspaper article quoted the striker as saying he is struggling to find any appetite for the game.

But Mackay has consistently denied any hint of psychological problems, insisting Bellamy was not in a bad state of mind and had looked "immense" on the training field having recovered from injury.

"He has all his problems on and off the field, but when he walks over the line you know what you get from him. Sometimes it's utter brilliance and that's what we had against Leeds."

"I don't know who's doubting his commitment," added Mackay, who signed Bellamy on a free transfer in August.

"From the day I've met him to today, I've never doubted his commitment to football.

"He's worked very, very hard since the day he arrived at the training ground after he signed.

"Unfortunately he took a bad calf knock, which has stopped his game-time in the last couple of weeks.

"That's what we had to do this week to get him onto the bench. He certainly wasn't ready to start and he won't be for certain games this season."

Cardiff's victory over Leeds came on the back of a 3-1 win over Wolves before the international break and takes them to within a point of early Championship leaders Blackburn Rovers.

Peter Whittingham's penalty added to Bellamy's opener, although a quick Leeds response from Rodolph Austin made the final stages tenser than expected after a dominant second half.

Mackay declared himself "delighted" with the two victories against potential promotion rivals, taking pride in what he sees as the growing character shown throughout the team.

"It shows consistency on our part," he said. "It shows resilience, because at times we've had to dig in. But it also shows quality."