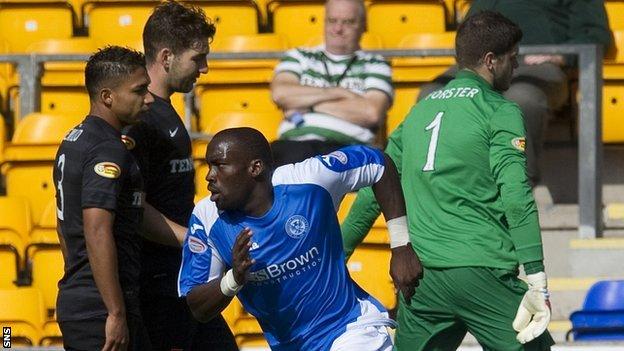 Celtic manager Neil Lennon warned his players about losing their domestic focus following their first defeat of the season.

Lennon's side warmed up for their Champions League opener with a 2-1 defeat by St Johnstone in Perth.

That's one point out of six in the last two league games. It's not acceptable

"I think some players are not concentrating on what they should be doing and thinking about the Champions League," said Lennon.

"Some players never turned up. They need to buck up their ideas."

Kris Commons fired Celtic in front and had a penalty claim turned down after Gregory Tade's equaliser.

"I haven't seen it again but from, where I was, it's a penalty and a sending off," Lennon said of Steven Anderson's challenge.

Rowan Vine fired an 80th-minute winner for Saints and though Lennon was critical of his players' attitude, he insists his players are not taking getting carried away with their status as overwhelming Scottish Premier League title favourites.

"I don't detect that among the players," he told BBC Radio Scotland.

"What I detected was a listlessness, we looked leggy at times and there was no real urgency about our play.

"We did create some chances but we weren't sharp enough to finish them off and defensively, at times, we looked poor; not committed enough to challenges, letting people run off us.

"We got off to a great start and never capitalised on it. We probably thought after we scored that it was going to be easy and games are never easy.

"We looked like strangers at time and some of my main, consistent performers were very, very poor.

"I'm not going to answer any more questions on Champions League games before SPL games because I just think it's festering into the players and they look like they took their eye off the ball.

"That's one point out of six in the last two league games. It's not acceptable and that performance wasn't acceptable."

Celtic host Benfica on Wednesday and Lennon urged his side to improve.

"We need to get back on the horse very quickly," he added.

"There'll be a full house and I'm expecting a big performance from them.

"Today's performances was needless and unacceptable and I'm very, very disappointed with them for the first time in a long time."