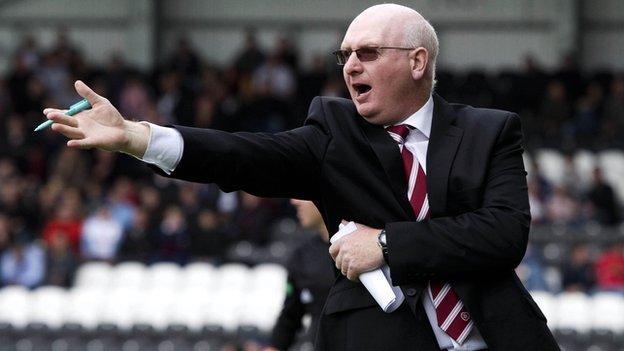 Hearts boss John McGlynn has asked his club's fans to be patient after the side slipped to their second straight league defeat.

The Tynecastle outfit fielded a number of youngsters and McGlynn feels there are positives to be found.

"I don't think you could fault the players' work ethic and committment, and the way we tried to play," he said.

"I thought we tried to play some great football. We're not doing a lot wrong but we're being punished for it."

Hearts have not scored in their last three Scottish Premier League matches and missed a number of good chances to go ahead at St Mirren Park.

"I felt we had two really, really great opportunities in the first half, at least two, to get in front," McGlynn told BBC Radio Scotland.

"Goals change games and if we had been able to get in front it might have been a different end to the game."

McGlynn's men have also gone five games without a win and the manager thinks they need to be braver if they want to pick up points.

"We've got to put our bodies on the line to get the ball over the line, in the opponents' goalmouth," he added.

"It was the situation in the last game against Dundee when we had so much possession.

"We had possession and so many opportunities but we didn't take them and today's the same."