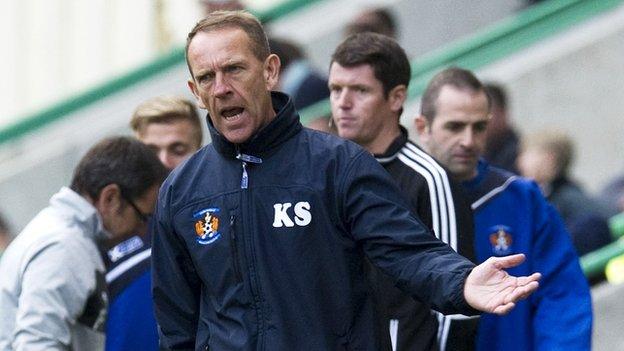 Frustrated Kilmarnock manager Kenny Shiels described referee Steven McLean as a "gentleman" despite being angry at his decision to award Hibernian a penalty.

With the match tied at 1-1, McLean pointed to the spot when Killie defender Ryan O'Leary moved in on Paul Cairney.

Cairney appeared to go down rather easily and when asked about the decision, Shiels said: "I don't want you to tease me into controversy. I will let everybody else decide that."

Hibs moved to second in the table with their 2-1 win, while Kilmarnock are eighth after six matches.

The Ayrshiremen rallied in the second half but Hibs defended stoutly and might have added to their tally through Griffiths, but for a fine Kyle Letheren save.

Shiels added: "I was pleased that there was an improved performance and we provided some entertainment. That's what we are building to achieve this season.

"But I am disappointed at the outcome, football is like life - you don't get everything that you deserve, and I think it is a fair summing-up to say they that we were unfortunate today.

"They made a lot of good saves."

Asked about the penalty decision, the Ulsterman said: "I don't want you to tease me into controversy. I will let everybody else decide that.

The Ulsterman felt referee McLean was perhaps influenced by a passionate home crowd.

"There were quite a few referees in the crowd. That had a major influence on certain things that happened on the pitch.

"There was a lot of stuff that went on out there that I wasn't happy about," said the Killie manager.

"But I can't criticise my players for their commitment."

Shiels walked on to the pitch at half-time to discuss the decision with the referee and continued the conversation in the tunnel.

"We had a good chat at half-time. Fair play to Steven," he said.

"I had a go at him in the tunnel, just to say there was a lack of respect shown to my players.

"He just brought me in, which was sensible, and said, Look, Kenny, we do respect your players.

"Not all referees will talk to you. They get on to a pedestal and they feel they are more important than they are.

"Steven is not one of them. He spoke to me like a gentleman and I appreciated that.

"We were very unfortunate today."