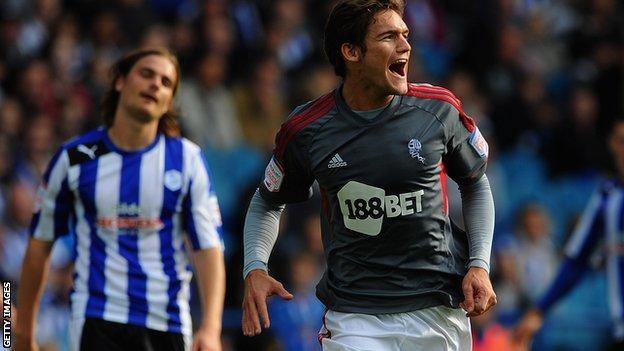 The midfielder netted after a mazy run, beating three players before smashing a shot into the top corner of the net.

The visitors went ahead on the stroke of half-time through Marcos Alonso who scored after some sloppy defending.

On-loan Everton man Ross Barkley had restored parity with a penalty after Anthony Gardner was fouled in the box, but Davies was the match winner.

The loss represents just seven points picked up from seven games for Dave Jones's side, their worst start to a league season in five years.

Their second home defeat means they have now equalled the total number of losses suffered at Hillsborough last season and they started the match on the back foot as Bolton winger Chris Eagles came close with two efforts, one struck wide and a lob that just went over the bar.

It was the former Manchester United man who provided the first goal, as his corner was headed home by Spaniard Alonso.

Wednesday, whose own Spanish player Rodri forced a good save from Adam Bogdan, were given the chance to draw level as Gardner was brought down in the area by Keith Andrews, and Barkley confidently tucked home the penalty just after the hour mark.

Minutes later though, Davies took centre stage after being given the ball by namesake Kevin, he embarked on a solo run which left Wednesday defenders floundering and a shot that goalkeeper Chris Kirkland had no chance of saving.

The home side's best chance of a second equaliser fell to Slovenian Nejc Pecnik but his 20-yard volley sailed over the bar as the Trotters secured their fifth successive victory in league and cup against the Owls.

Sheffield Wednesday boss Dave Jones: "Our lads feel that every mistake we make at the moment is being punished.

"We had three or four chances to clear both goals, but we didn't and we have been punished. That is the level we are playing at - we can't keep giving the opposition easy chances to score.

"I felt we worked hard but we have to learn not to switch off. It's a tough learning curve.

"We have a lot of young players at the club and we can't get our heads down. We have to stay strong, keep plugging away and hopefully we can turn this run around.

"If fans thought we were going to come into this division and take it by storm they are kidding themselves. It's a building process and we are just at the start of that."

Bolton boss Owen Coyle: "When you come to a stadium like Hillsborough, with the huge crowd, you know it's going to be difficult. So for us to put on a performance like that, I thought we were terrific.

"It would have been easy for our players to feel sorry for themselves when they got it back to 1-1 - from a penalty that I thought was debatable.

"It didn't affect us, though. We picked ourselves up and scored a quality winning goal.

"We've scored two goals today and we could have had five or six. Nobody who witnessed that game can argue that the better team won and that we gave a great performance, so we can take confidence from that and now kick on."