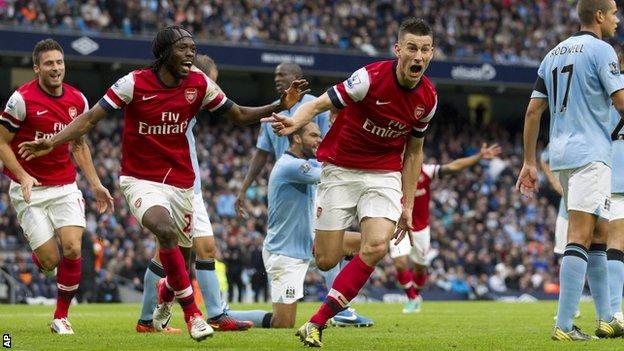 Laurent Koscielny scored a late equaliser as Arsenal came from behind to snatch a well-earned point from a breathless encounter with Manchester City.

The Frenchman found the net nine minutes from time, thumping in from close range after the champions had failed to clear the danger from a corner.

City had taken a scarcely deserved lead when Joleon Lescott headed in David Silva's corner five minutes before the break.

But Arsenal kept going to salvage a point from a match that maintains both clubs' unbeaten starts to the season and leaves them locked together on eight points from five matches.

City manager Roberto Mancini cut a fraught and frustrated figure throughout the game, as City once again failed to recreate the attacking fluency that became their trademark in the early months of last season.

He could only bring himself to describe his side's Premier League campaign as "satisfactory" in his programme notes before the game. Against Arsenal there was little evidence to persuade him to change his verdict.

Life has not been easy for his opposite number Arsene Wenger these past few years. With Robin van Persie joining the recent exodus of star players from the Emirates Stadium, a sense of anguish among the north London side's supporters is understandable.

But this was an accomplished performance, made all the more satisfying by the contributions of Santi Cazorla and Aaron Ramsey.

The Arsenal faithful even mocked their City counterparts' "Poznan" celebration, by turning their backs to the pitch and bouncing up and down when Koscielny found the net.

And at the final whistle the overwhelming emotion in their section was a sense of pride in the continuing improvement of their team.

If the scarcely believable events against Real Madrid at the Bernebeu on Tuesday night had left City deflated and leggy, Arsenal did their best to exploit it during a frantic first half.

Using the energy of Abou Diaby and the guile of Cazorla, Wenger's side were sharper to the ball and swifter to use it, but yet somehow still found themselves behind at the interval.

Manchester City extended their unbeaten home league run to 32 matches, stretching back to a 2-1 loss at Everton in December 2010.

With Yaya Toure restricted to a deep-lying midfield role and Javi Garcia largely ineffectual, Arsenal bossed the midfield battle early on, with Ramsey and Mikel Arteta pulling the strings. It was Arteta's Spanish compatriot Cazorla, however, who really caught the eye.

Whether dribbling or passing the ball, he showed once again that he has the alertness and imagination to see and exploit openings of which others have no inkling.

He was at the heart of Arsenal's most creative moments, combining with Ramsey to put Gervinho in behind the City defence after 16 minutes, only for the forward's first touch to desert him.

Cazorla twice tested City keeper Joe Hart with shots of his own, once from open play and once from a free-kick, as Arsenal attempted to convert their dominance into goals.

Gervinho found space again only to shoot into the side netting, while a low cross by Gibbs skidded across the six-yard line as City defenders willed it to safety.

Only Sergio Aguero, on his return to the side, carried a potent attacking threat. The Argentina striker tested Arsenal goalkeeper Vito Mannone with a wicked low shot after 13 minutes, but it was not until Mancini switched Scott Sinclair, making his home debut, to the right flank that City's luck changed.

The home side's goal was straightforward; Silva's 40th-minute corner was headed in by Lescott as Koscielny and Lukas Podolski stood by and Mannone came and missed. Captain Thomas Vermaelen, absent with flu, may just have made the difference.

The goal woke City from their slumber. Mannone went some way to making up for his error by tipping a fierce Edin Dzeko shot just over the crossbar before half-time and City's momentum continued after the break.

Aguero might have gone to ground in colliding with Koscielny in the penalty area. The City striker, to his credit, stayed on his feet only for his shot to be deflected to safety when a penalty might have been greater reward.

Arsenal were far from finished, however, as City retreated deeper and deeper, happy to strike from distance. Cazorla drew a stunning save from Hart with a shot that appeared destined for the top corner.

But Arsenal were not denied for long, finally getting their reward as Koscielny found the net with a thunderous shot after City had failed to clear the resulting corner.

Gervinho might have won it for Arsenal as the clock ticked into injury time, only for his shot to fly high and wide.

It was hard not to imagine what might have been had Wenger been able to call on the services of a world class striker, like Van Persie, to finish off so much of his team's good work.