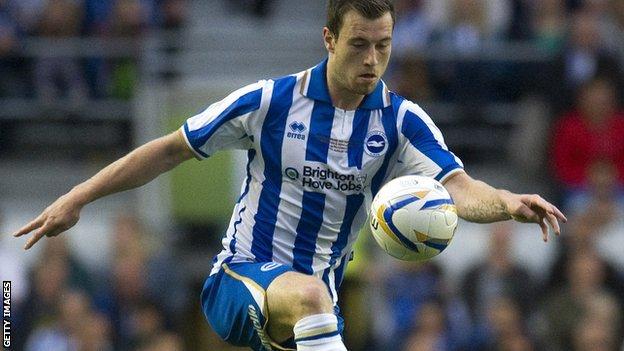 Brighton moved two points clear at the top of the Championship with an impressive victory over Millwall.

Both goalkeepers were forced into early saves but the visitors were soon in command and Will Buckley cut back from the right for Ashley Barnes to fire in.

Adam El-Abd made it two from close range soon after the break when a left-wing corner was not properly cleared.

Substitute Chris Taylor was dismissed for a lunge but a late Chris Wood drive for 10-man Millwall saw a tense finale.

The home side almost completed an unlikely comeback, only for former Manchester United goalkeeper Tomasz Kuszczak to thwart Wood in added time with a stunning save from a point-blank volley.

He had also denied the on-loan West Brom striker as early as the fifth minute with a smart stop, while opposite number David Forde kept out Wayne Bridge's angled drive.

Brighton soon asserted themselves and took the lead in the 17th minute as Buckley beat Scott Malone and pulled the ball back from the byeline for Barnes to sidefoot home from 10 yards.

Buckley, who had earlier fired narrowly wide, almost added a second for the Seagulls after beating Forde to a long ball and steering his shot goalwards, but Shane Lowry blocked on the line.

Kuszczak was injured after Taylor stretched for a 50-50 challenge which referee Andre Marriner deemed worthy of a red card.

But the Polish keeper recovered to help his side to a fifth successive Championship win and comdemn Millwall to a third consecutive league defeat which leaves the Lions in the bottom three.

"My impression was it was a harsh decision [Chris Taylor's red card]. I asked the referee if he did catch him and he said he did, but Chris thought the ball was there to be won and any contact was none or minimal.

"I was disappointed with the goals against us, we gave ourselves a mountain to climb.

"Ultimately it was a mountain we nearly did climb with a lot of pressure and that late chance, but against a good side we can't be conceding that many goals."

"It's very nice to be top. But when you start in this league you know how difficult every game is, you need to be on the bench watching that last 20 minutes, with my team defending like mad, to know how much you have to suffer to get three points.

"We are supposed to know how to play against 10 men and we didn't do it today.

"The last 20 minutes was unbelievable, the pressure they put us under. So it was a great three points."