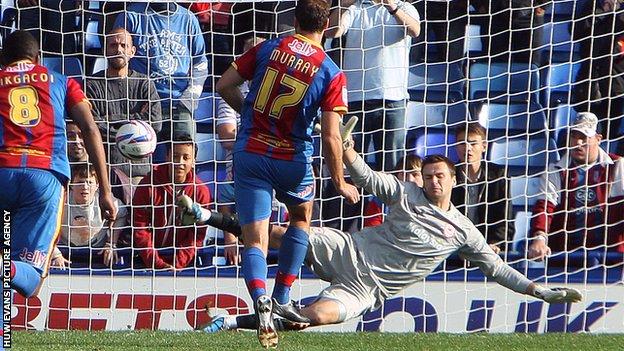 Glenn Murray scored a second-half hat-trick for Crystal Palace as Cardiff City surrendered a two-goal lead in a thrilling game at Selhurst Park.

Aron Gunnarsson scored Cardiff's opener against the run of play and Don Cowie's volley extended their lead soon after.

Murray reduced the deficit from the spot on 52 minutes before equalising 10 minutes later.

And the striker completed his hat-trick and Palace's comeback with his second penalty of the game on 72 minutes.

Craig Bellamy returned to Cardiff's line-up, one of three changes to the side which had secured their first away win of the season at Millwall.

Palace were on top during the early stages of the game and Kagisho Dikgacoi's effort from distance was denied by a one-handed save from David Marshall.

Despite the home side's early chances it was Cardiff, very much against the run of play, who took the lead on 13 minutes.

The ball fell kindly to the advancing Gunnarsson, who after a fortunate deflection, slotted the ball past Julian Speroni for his first goal of the season.

Two minutes later, the visitors doubled their lead courtesy of another goal that came out of nothing.

The Eagles' defence failed to clear following Bellamy's shot from distance and Cowie capitalised with a fierce volley.

Cardiff were in total control and Bellamy should have added their third but the Wales striker rifled over the bar from nine yards.

At the back, Malky Mackay's side managed to nullify Palace's main threat, Wilfried Zaha, as they went into the break.

Palace emerged for the second half with purpose, though, and their early pressure was rewarded with a penalty six minutes after the restart.

Andrew Taylor was adjudged to have handballed Andre Moritz's free-kick and, from the spot, Murray made no mistake as he halved the deficit.

The goal gave the home side renewed hope and Marshall was forced to tip Murray's effort past the post before Blake headed over from the resulting corner.

But Murray was not to be denied on 62 minutes. A shot from Moritz deflected to Murray at the back post and the ex-Brighton striker squeezed a shot past Marshall from a tight angle.

Dougie Freedman's side were awarded their second penalty of the afternoon on 72 minutes following Heidar Helguson reckless challenge on Jonathan Parr.

Murray again scored from the spot to complete a remarkable comeback.

"As manager it was the best comeback. I don't think we deserved to be two down. To show the character and energy we did, it was a correct result.

"If you were watching the game, you saw we didn't deserve to be down. We played with fantastic approach play, with crosses.

"In the second half, the shots were coming off and we were causing them a lot of problems."

"I was disappointed today and delighted at Millwall. If we don't give two penalties away we would have sat top of the table tonight.

"I don't have any qualms with the penalty decisions. In the first half we scored two good goals and the third chance, nine times out of 10 Bellamy would have taken that.

"But we gifted them two penalties. The first one, one of our players raised his arm. With the other one Helguson made a rash challenge."