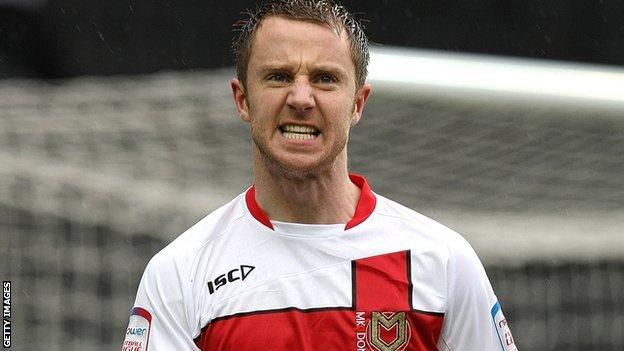 Dean Bowditch grabbed a hat-trick to hand MK Dons their first away league victory of the season at winless Bury.

Bowditch made it 1-0 when finishing off Luke Chadwick's cross before grabbing his second from just inside the box.

The striker completed his hat-trick with a cool finish after latching on to a free-kick from Stephen Gleeson.

Bury scored when substitute Lenell John-Lewis lobbed the onrushing David Martin but Chadwick found the top corner to seal the win in injury-time.

"I thought the players were magnificent in the first half. I thought we moved the ball and passed the ball with so much confidence and flair - not arrogance, just confidence.

"That's been us this season but this time we took our chances, we got the lead and we went from strength to strength.

"I thought all the goals were very good, and we defended well too. The substitutes came on and made a difference, so all the players really did shine.

"I still want to improve the squad and get better and better, that's my job. With games coming thick and fast you worry about fatigue."